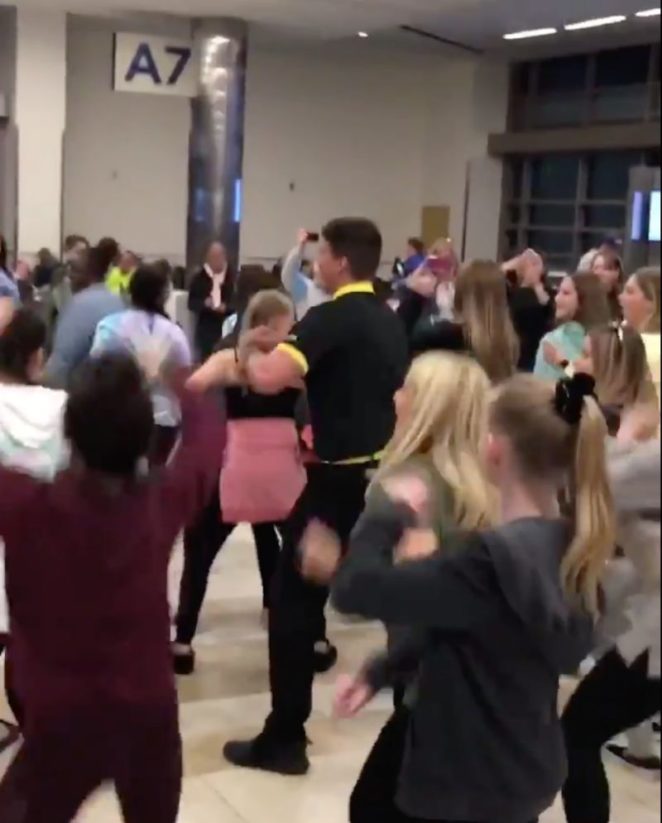 The name Spirit Airlines may not be in the high ranks of a household name in the airline business compared to the larger airlines in the business.

Maybe it is just a coincidence that Spirit Airlines employee Robert Dillon decided to join a group of cheerleaders who were stranded at the Myrtle Beach International Airport in South Carolina on April Fools Day when their flight from Myrtle Beach to Atlantic City was delayed due to bad weather in the area.

If there is one thing that passengers do not like being stranded inside an airport, is the long delays waiting to board their airplane to get to their destination safe and sound by sitting around on their seats.

The cheerleaders were in Myrtle Beach as  part of a cheerleading competition that finished. I guess Robert decided to make the lives of the stranded passengers better by joining in a dance routine with the cheerleaders to “The Cupid Shuffle” which benefits both the cheerleaders and Robert in terms of getting some good exercise and keeping the passengers happy as they can be.

Thanks to the power of social media, Robert has gained a lot of fans when he was seen dancing with the cheerleaders before they could get onboard their flight back to Atlantic City New Jersey that same day on April Fools Day.