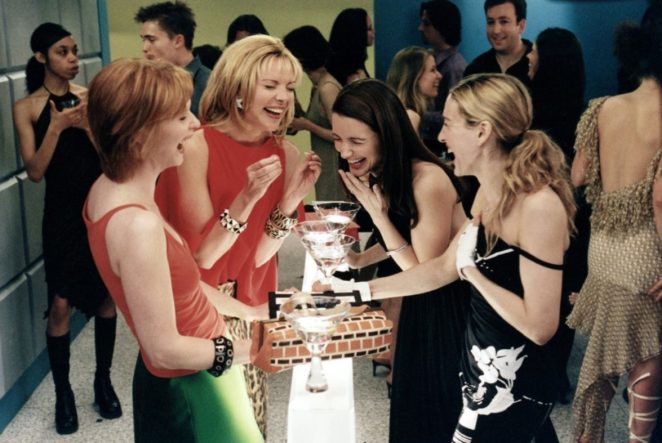 I used to watch the reruns of Sex in the City series when it came on regular TV, and I came to know Samantha, Carrie, Charlotte, and Miranda as the four bitches in heat of NYC. But they are all actresses, and most actresses play opposite roles to their actual personality. So, I decided to find videos of these four actresses being interviewed because celebrities are themselves promoting their work when they are on a talk show being interviewed.

In the next four videos, get to know the real life Sex in the City women: Kim Cattrall, Sarah Jessica Parker, Kristin Davis, and Cynthia Nixon. I found an episode from Sex in the City with all for actresses.

Kim Cattrall played Samantha Jones on Sex in the City. Samantha had her own PR firm, as well as a younger lover, played by Jason Lewis, and she also experimented with a lesbian lover. In this first video, Piers Morgan interviews Kim Cattrall.

Sarah Jessica Parker played Carrie Bradshaw on the series. Carrie was a freelance writer, as well as noncommittal with men, although she had an on-off again relationship with Mr. Bigg and became engaged with another man, although she turned him down.  In real life, Sarah is married to Matthew Broderick, and she has kids.

Kristin Davis played Charlotte York on the series. Charlotte was the prudish character who worked in an art gallery, as well as she was married to two men on the series. In real life, Kristin seems to be an activist and she adopted a child that she is raising on her own.

Cynthia Nixon played Miranda Hobbs on the series. Miranda was the lawyer, and she eventually met a bartender, had a baby son with him, married him, and moved to Brooklyn. In real life, Cynthia is married to a woman, still acting, and she has kids.