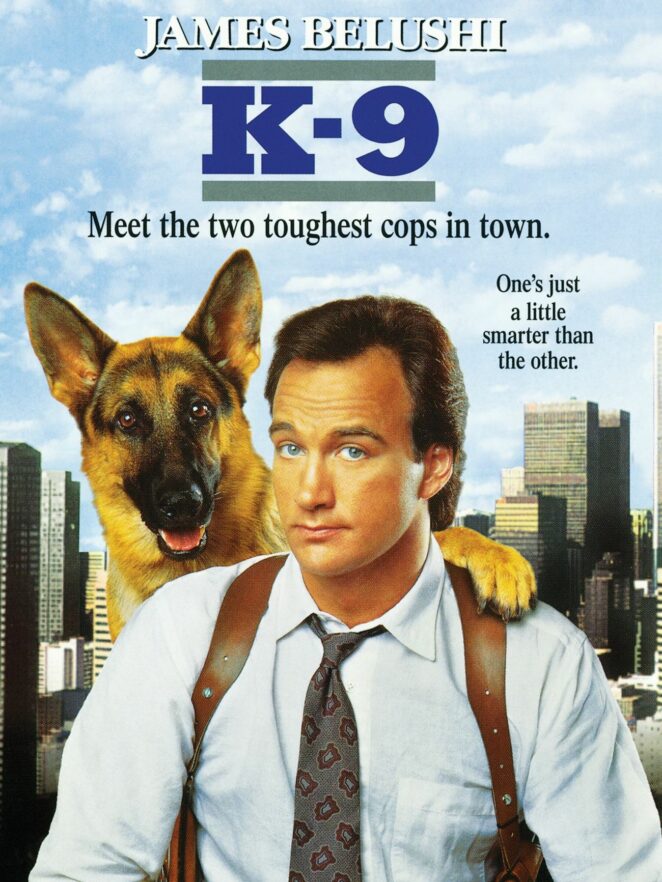 K-9 is a movie I just watched on Netflix. It is starring Jim Belushi and Jerry the k-9. It full of comedy and action Mike Dooley is played by Jim Belushi and he is a detective. He has been chasing this drug deal for 2 years. It opens he did not have a phone to call his girlfriend that he would be late. He got out of his car and got into another car there in isolation that were having sex in the back seat of the car and had champagne I think. They all watched his car blow up. The drug dealer sent someone to kill him but they just got his car. He went to the station and wanted a car to use and the person said he would get a car if he chose a partner. He decided to choose a dead guy but the person still said you need a partner to get a car. He went to the K-9 and got a dog to sniff out drugs. He and the dog named Jerry Lee, got off on the wrong foot. His girlfriend liked Jerry Lee. When he put Jerry Lee outside of the home that he shared with his girlfriend he would bark and the neighbors were not happy. He brought him inside but locked him in a room. He was always late for dates with his girlfriend because he wanted to get this drug dealer. When the drug dealer kidnaps his girlfriend he goes to his house and acts crazy there and threatens those with his gun and Jerry Lee gets up on the table and the drug dealer does not like it. Dooley is arrested and they stop to let Jerry Lee go to the bathroom and he and Jerry Lee steal the cop car. They do a stakeout because the drug dealer was expecting a shipment and Jerry Lee chases the drug dealer and the gets shot. Dooley takes him to the nearest hospital and gets the doctor to take the bullet out of him. Jerry Lee is taken to recovery after that and Dooley does not know it is recovery so apologizes to him and when the doctor finds him and tells him it is recovery and so he tells Jerry he is taking back all he said to him. He thought he was dead and not alive. I will stop here because do not want to tell you the ending. I believe we could all use something funny in our lives right now with what is going on around us.

So hopefully you will watch this and like it.