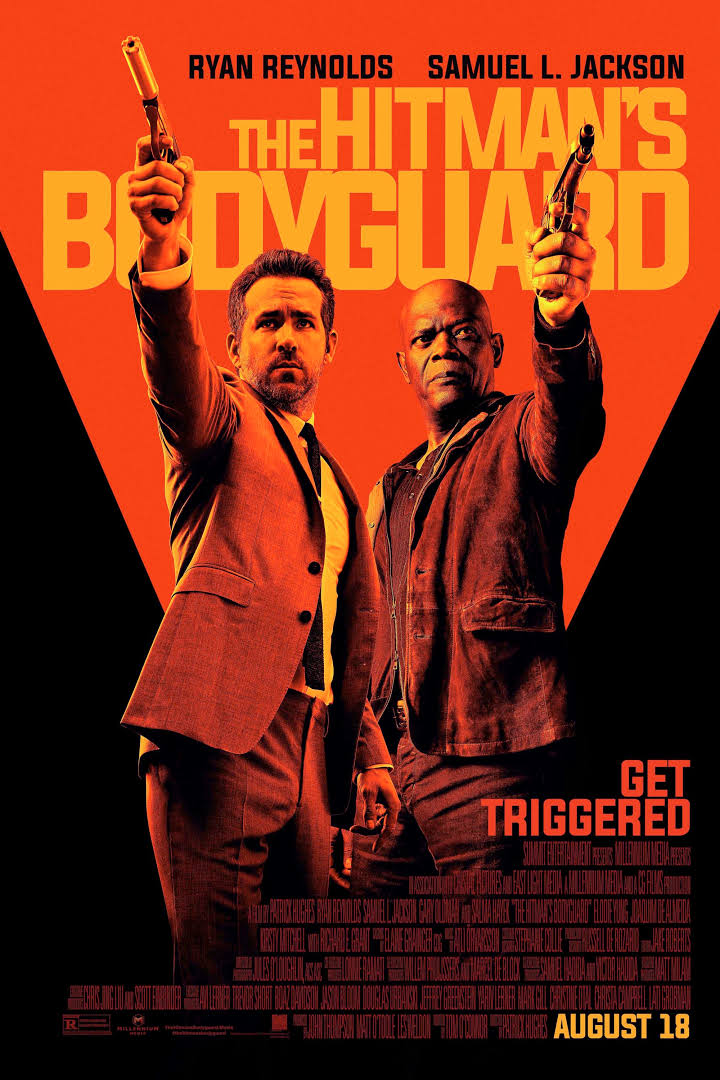 Michael Bryce, a down on his luck bodyguard, gets himself a new client. His new client, hit man named Darius Kincaid, is the only witness left to testify against a powerful Dictator. A clock is ticking, hopefully they’ll be able to make it without killing each other first. I saw the trailer to ‘Hitman’s Bodyguard’ back in June while waiting to meet up with friends to see the ‘Wonder Woman’.

I was really excited to see Ryan Reynolds and Samuel L. Jackson in action. This was my second time watching a film by myself in theaters. The two main actors have good chemistry with their funny arguments. Michael, the go by the plan guy, ‘boring is safe’; while Darius goes with the flow, ‘when life gives you (poop), you make Kool-aid’. It was an interesting story how basically Darius would be hired to kill Michael’s client in the past. It’s a nice action pack comedy with some heart to heart.

The Director’s previous work was ‘The Expendables 3’ so there’s some cool fight scenes. The Fight choreography flow out just like blood. You get it. There’s a lot of blood, so be ready for bullets being flown everywhere. Patrick Hughes also directed a short called ‘Signs’ which deals with love. ‘Hitman’s Bodyguard’ deals with love as Michael deals with his feeling for his ex-girlfriend, a police officer, and Darius testifying to free his wife, Sonia. Darius and Sonia’s relationship is strange, but touching at the same time. Sonia describes her husband as a cockroach. She’s proven right throughout the film as Darius escapes through the cracks and is difficult to kill.

The ‘Hitman’s Bodyguard’, is Tom O’Conner’s second film to write. His first film, ‘Fire with Fire’ which has a similar aspect to ‘Hitman’s Bodyguard’ with testifying against a dangerous man. The story has a nice amount of various feels with some action, comedy, a bit about love, and morality. Also, a lot of cussing since we are talking about Samuel L. Jackson and Ryan Reynolds. A great summer film to catch with friends, or enjoy by yourself.

The song Samuel L. Jackson sings in the film is also played during the credits. He has a couple of moments to show off his singing abilities, along with Ryan Reynolds too. It’s cool to see how lot of the main characters played comic book characters with Deadpool becoming the bodyguard of Nick Fury. Elodie Yung plays Amelia Roussel, Michael’s ex-girlfriend, who plays Elektra Natchios in ‘Daredevil’ and ‘The Defenders’. Gary Oldman who plays the Antagonist plays Lt. James Gordon in Christopher Nolan’s Batman Trilogy.