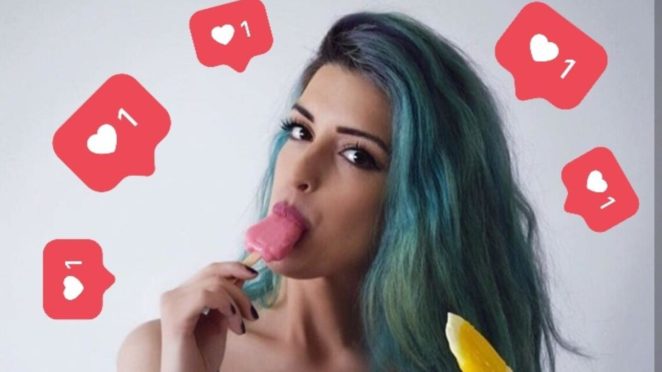 After breaking up, I didn’t delete the image. I deleted my entire fucking profile.

Tabloids are the happiest when they catch a famous person in a lie, but we “ordinary people” aren’t anything better than Beyoncé, which makes her thighs smaller for Instagram. Our Twitters, Facebooks, Snapchats and other social networks are full of lies. We pretend to be more beautiful, smarter, happier to make us feel better. I am speaking in the plural because I am also crooked for the faking on social networks.

I like to believe that my lies are harmless – sometimes I beautify bageyes in the picture and add effects to make me look nicer. Although I was not always moderate in that. There were moments when the day after the posting a photo, likes are still coming, and I look at myself and I don’t recognize myself. For this reason, I stopped completely editing the selfies for a while and now I’m trying to make it minimal. Some of my lies are still on Instagram, I deleted only the worst ones that made me really embarrassed.

For example, in this photo, my skin seems like it’s not my but drawn in the Photoshop ‘cuz I edited it too much, but I didn’t delete it, like many similar to this one, because I have a lot of likes that feed my ego. That’s how I accepted my lies that allowed me to go in search of someone else’s. I talked to people about the lies due to which they got most likes and asked them why they deleted or left them on the Internet.

This is definitely a photo that every time I put as profile picture gets a lot of likes. It is true that from the moment I took the photo, I grew up about 45 pounds/20 kilograms and that I don’t look like this for a long time. What many people don’t know is that Photoshop worked – I had to cover the white lines of the swimmsuit on my ass and little blur the skin. Although the photo looks “spontaneous”, I took it after thousands of tries due to my bad camera and timer that I used before I took up the photo.

I never deleted the photo because it looks so damn good and I really do not care about using Photoshop. Everyone uses Photoshop today. Samsung has beauty camera that fix your face in a moment. Few filters on the smartphone and we look better. Everything is a lie, relax and continue faking your life. – Maša, 26

Well, that’s how it was. I was in a very long relationship that by the naturally, at some point, it had to become a matter of social networks. Unlike many, we were lucky and social networks loved us a lot, so I often made posts about us. However, it wasn’t so great, of course, and I was in love, so I posted our common image for anniversary of our affair and wrote and wrote what our relationship is all about. Plot twist, it was not our relationship, but everything I wanted to be. The picture was liked several hundred times and everyone wanted to be like us.

After breaking up, I didn’t delete the image. I deleted my entire fucking profile. – Viktor*, 25

Oh, I remember that I wrote the status on Facebook “What happened with him last night was just a joke”, what is a verse from a song by Serbian singer Milica Pavlović. I wrote it to annoy one guy, but he didn’t understand that. And I didn’t delete it. He thought that I am serious, he took out my soul. It may be the third time that I have posted this, so people started to like it in the meaning, “you are sick.” – Nemanja, 25

I had a “series” of photoshoped pictures with Radulijca (famous Serbian basketball player) – so hundreds of likes. It has been funny for my friend to photoshop pictures because we always talked about being a good couple, right. Then people took them seriously, especially the second one, because it was done as it was the screenshot of his Instagram.

Once, also in Photoshop, on a Britney ‘s photo from 2007, on which she is shaving her own head, I put my face. Some family members called me to ask if I was normal, they said it’s creepy and that I am crazy, so I had to explain that it was actually Britney – Jelena, 24

The biggest lie – “fall in love” pictures at moments of absolute breakdown of the love affair.  Of course, I deleted the photos after the break up. To be more directly, that was photos from my birthday, the last one we celebrated together. He had never before made any more effort for the gift – he made some chocolate hearts. These images were published on Instagram and on Facebook. These were our common, but also the pictures of the gift. Fuck, it was stupid to break up before my birthday and make a drama. – Anja, 24