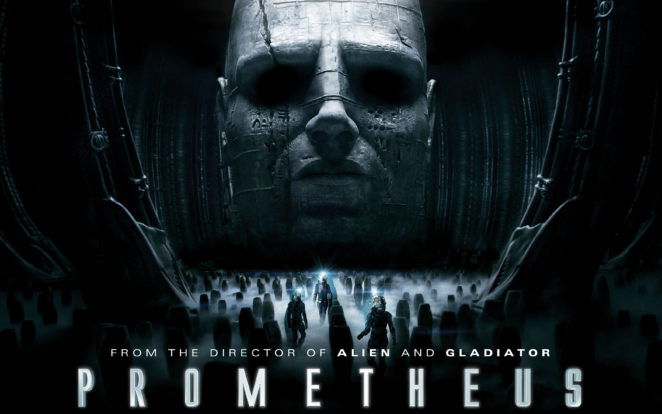 Prometheus is a 2012 science fiction film that set in the late 21st century that tells the story of the crew on-board a spaceship with the same name of the movie title — Prometheus (derived from Greek mythology, Prometheus is one of the Titan who introduced fire to mankind). This film according to its director named Ridley Scott, shares “strands of Alien’s DNA, so to speak”, and takes place in the same universe, yet Prometheus explores its own mythology and ideas.

A movie cast by two of my known renowned Hollywood’s promising actors, namely South African actress Charlize Theron and German born actor Michael Fassbender.  Michael Fassbender (Erik Lehnsherr aka Magneto of X-Men film reboot series / Cal Lynch and Aguilar of Assassin’s Creed / Stelios of 300) played the role of David, a super-advanced android that acts as the ship’s butler and maintenance man. Charlize Theron (Cipher of The Fate of the Furios / Ravenna of Snow White and the Huntsman and The Huntsman: Winter’s War / Stella Bridger of The Italian Job / Aeonflux of Aeonflux / Imperior Furiosa of Mad Max: Fury Road) played the role of Meredith Vickers, a Weyland Corporation employee who is sent to monitor the expedition to a distant moon LV-223 which they believed they should come as they have found proofs as they are invited from humanity’s forerunners.

This movie was set in 2089, and Peter Weyland, played by British actor Guy Pearce (Aldrich Killian of Iron Man 3 / Fernand Mondego of The Count of Monte Cristo / Alexander Hartdegen of The Time Machine / Kendall of Bedtime Stories), a billionaire and founder and CEO of Weyland Corporation, created David the android and funded the expedition to a distant moon LV-223, which he later revealed himself riding on an expedition.

Swedish actress Noomi Rapace (Madame Sinza Heron of Sherlock Holmes: A Game of Shadows), played the lead role of Elizabeth Shaw, an archaelogist who is at the same time a true believer of God with a very strong faith, remained one of the survivors in the expedition. Also in the cast were Idris Elba (Heimdall of Thor and Avengers: Age of Ultron / Krall of Star Trek Beyond / Shere Khan of The Jungle Book / Chief Bogo of Zootopia / Stacker Pentecost of Pacific Rim / Moreau of Ghost Rider: Spirit of Vengeance), half-Ghanaian, half-Sierra Leonean actor who was bron at UK, played as Janek, the captain of the ship Prometheus; Elizabeth’s love interest and an archaeologist named Charlie Holloway, played by South Carolinian actor Logan Marshall – Green (Jackson Bryce aka Shocker of Spiderman: Alumni Homecoming) also took part in the cast; Sean British actor Sean Harris (Lane of Mission Impossible: Rogue Nation  / Macduff of Macbeth) played the role of Fifield, a geologist who has become mentally unstable after many missions, who appears to have a bright red Mohawk hairstyle; British actor Rafe Spall (Writer of Life of Pi / Noel of Shaun of the Dead / Mr. Tibbs of BFG) played the role of Millburn, a biologist; British actor with parents born as Hong Kong nationals Benedict Wong (Bruce Ng of The Martian / Wong of Doctor Strange / Kublai Khan of Marco Polo) played the role of Ravel, one of the crew on-board the ship; and Scott actress Kate Dickie (Katherine of The Witch / Lisa Arryn of Game of Thrones) played the role of the ship’s medic named Ford.

This is one of the best sci-fi movies ever produced these years, with some few dramas and terrifying scenes that will surely rush your adrenaline up. It’s a movie that plots one of the most desired and  most sought truth for conspiracy about aliens and other foreign beings from space that we longingly wanted to encounter. A must-see movie for all alien fanatics out there. I’m sure Sigourney Weaver had watched this one too. Remarkably astounding with intergalactic visual experience. This one deserves 5-star rating!