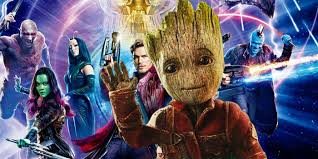 This movie runs in 136 minutes and has a production budget of $200 million, yet has a whooping grossing income of $862 million, making it the fourth highest-grossing film of 2017. It also out-grossed its predecessor film which had earned only $773 million.  This film received positive reviews generally, particularly for its soundtracks, visuals and the cast. A sequel entitled Guardians of the Galaxy Vol. 3 is being worked out for a possible franchise.

This movie continues the journey of a famous cosmic superhero team in the galaxy called Guardians of the Galaxy. This team is led by Quill aka Star-Lord, played by Chris Pratt (Owen of Jurassic World), a half-human and half-celestial who was abducted from Earth as a child and raised by a group of alien thieves and smugglers called Ravagers. Also in the team were: Gamora, played by Zoe Saldana (Neytiri of Avatar), an orphan from an alien world trained by Thanos to be his personal assassin, but later she seeks redemption for her past crimes; Drax the Destroyer, played by a famous professional wrestler Dave Bautista aka Batista (Hinx of Spectre) , who is half-Greek and half-Filipino ancestry. He is a highly skilled warrior in search for vengeance against Thanos for the slaughter of his family; Groot, played by a famous action superstar Vin Diesel (Dominic of The Fate of the Furious), a tree-like humanoid who is the accomplice of Rocket; Rocket is a genetically modified raccoon bounty hunter and mercenary, who is at the same time a master of weapons and military tactics. He is played by Bradley Cooper (Chris Kyle of American Sniper).

Also in the cast were Yondu Udonta, played by Michael Rooker (William Rice of Jumper), a blue-skinned buccaneer who is the leader of the Ravagers and a fatherly figure to Quill who raised him when he was abducted from Earth; Nebula, played by Karen Gillan (Amy Pond of Doctor Who), an adopted daughter of Thanos who was raised with Gamora as siblings; Mantis, a newly recruit member of the Guardians played by Canadian actress Pom Klementieff (Haeng-Bok of Old Boy). She has the empathic powers who lives with Ego; Ego is an acient celestial who is Quill’s father, played by a promising actor Kurt Russell (Jimmy Harrell of Deepwater Horizon); Ayesha, one of the main antagonists in the story, played by Elizabeth Debicki (Caroline MacKenzie of Everest). She is the golden High Priestess and leader of the Sovereign people, a genetically engineered race of gold people; Taserface, played by Chris Sullivan (Andrew Blackwell of Imperium), a leader of the mutinous group of Ravagers; Kraglin, played by Sean Gunn (Marty Espenscheid of The Belko Experiment), Yondu’s second-in-command in the Ravagers; and Stakar Ogord, played by one of the most famous action superstars of all time Sylvester Stallone (Barney Ross of The Expendables), a high-ranking Ravager who has history with Yondu.

David Hasselhoff, one of the famous actors in his time who played as Mitch Bucchanon on a famous 90s TV series called Baywatch, made his cameo appearance in this film when Ego shape-shifts to his likeness. Stan Lee also made his cameo appearance here as one of the beings telling a story in a certain part of the galaxy. This Marvel film is indeed worth to watch since casts of the story will never make you feel boring, especially the innocent acts of baby Groot that make him sometimes do some clumsy things. Avengers Infinity War which will be released next year will do some connection stories and crossover roles for the Guardians of the Galaxy. This one is a great recommendation movie especially for those who are an avid fans of Marvel Comic Books. The entire plot of the story will certainly thrill you out with fun, laughter and awe, that’s why I give this movie a 5-star rating and an undoubtful two-thumbs up!!!