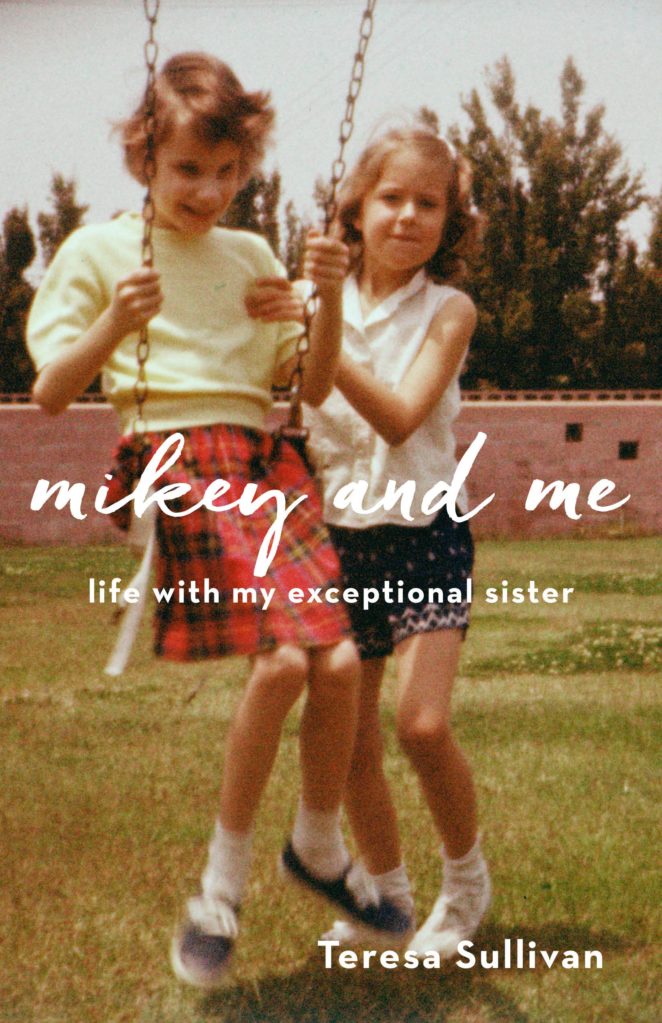 Life with My Exceptional Sister

I am reviewing a copy of Mikey and Me through She Writes Press and Netgalley:

Mikey was Teresa’s older sister, but even at eight she was like a two year old.  Unable to speak, brain-damaged and blind.

Michelle Colleen Sullivan, Mickey was born on February.02.1953, weighing only 2.3 pounds, a fragile baby into a fragile marriage.  Back in those days when babies fought to live they were rarely touched, even nurses only touched her when it was necessary.  Eleven months later Teresa was born.

At two Mikey underwent surgery for Glacoma, and for the first two and a half years she developed early and typically, but at two and a half, she spoke, even using big words like rambunctious, and would tell her Mother when her sister was crying, but then everything changed.  One minute she’d be mimicking nursery rhymes and the next she started screaming and clutching her feet.  She stopped speaking and became withdrawn.

Doctors encouraged their parents to instutionalize Mikey, but their Mother resisted.  When Mikey was ten, with their parents marriage strained she was taken Pacific State Hospital.  But after only three days of seeing how she was treated she came home.

By the time she was eleven Mickey had more bad days than good.  And it became obvious they could no longer handle her care.  Mickey was taken to Carmello state hospital,

As Teresa grew older she got into her share of trouble, ditching classes, dropping acid. In 1972 Teresa was in a motorcycle accident.  She suffered a skull fracture, and a broken leg.

By the time Mikey was Forty, budget cuts meant that instead having a place for the blind and mentally retarded, Mikey was placed in a group for those who had severe handicaps, like those in wheelchairs.

In those powerful memoir a tribute to her sister, Teresa Sullivan takes us on a journey through the joys, and sorrows, the loss and the pain of having a severely handicap sister.

I give Mickey and Me five out of five stars.