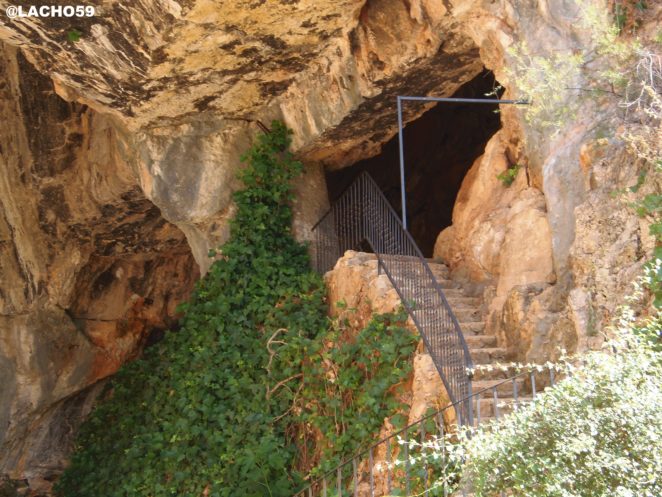 CAVE OF THE CALAVERAS

Located within walking distance of the cozy town of Benidoleig, the Cova de les Calaveres (“Cave of the Skulls”) is not the largest or most famous cave in the world, but certainly should be considered as one of the oldest and most Interesting of this type.

According to tests performed on both human and animal bones found that it has been established that life was present more than 50,000 years ago.

Many of the remains, including the bones of horses, rabbits, especially the important finding of a rhinoceros tooth, as well as flint utensils, axes and arrowheads, and stone for cooking, can be seen in the Provincial Museum of Archeology from Alicante.

The cave has a large entrance, the apex of which is very dark. It is believed that the soot of the fires initiated by the first inhabitants to chase the wild animals caused this blackening.

According to Calvo, a well-known geologist, the formation of the cave, which in some places extends to a height of 60 meters and a width of 40 feet, may well have occurred about 150 million years ago.

Moreover, there is evidence of a really prehistoric past. Only inside the cave, at the point where daylight begins to fade, is there a large bone deposit encased in stone containing the remains of creatures hunted and fished by early cave settlers. In addition, the bones of the settlers have been found nearby.

Going deeper into the cave you can see some very fascinating stalactites and stalactites, the general condition of which is quite good. Unfortunately, however, a number of them have been damaged, possibly the same nonsense work of the Vandals that scratched and scrawled in other parts of the stone.

Among the interesting stalactites one of the most memorable is “La Campana”, notable for its shape, dimensions and the fact that when it is struck there is a strange ringing sound.

As you proceed through the alley, which stretches for over 400 meters, it is possible to select all kinds of strange and wonderful forms of rough stone, including a map of Spain, a pirate, a wild boar, a crocodile, a bear Polar, bust of Sophia Loren, Don Quixote, and the heads of an elephant, a horse and the late President Kennedy. Of course, an imaginative mind helps considerably in the selection of these remarkable works of nature!

Several fish fossils, mussels and oysters are easier to discern. These are inserted into a rock halfway along the path of the cave.