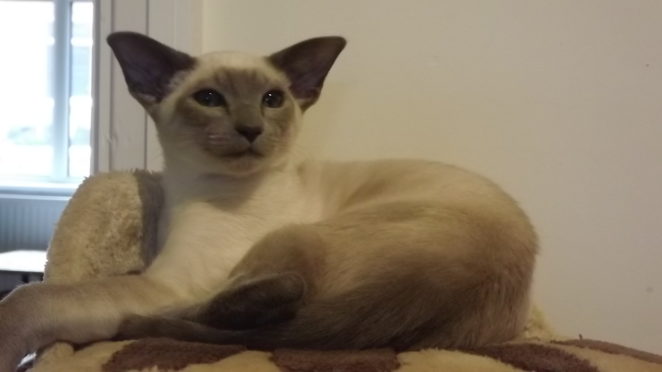 This place is OK, when all is said and done. It didn’t start off too well, what with me being put in a box then carried off in a car for hours and released in a house that didn’t look a bit like the one I was used to. My brother and sister, and my mum, were nowhere to be seen, and the people just weren’t my people. They didn’t look the same, and they certainly didn’t smell the same.

Then a week or two ago they put me back in my box and I thought that maybe they’d changed their minds and I was being taken back home. But that was not to be. I went on a much shorter ride to a place that smelt very peculiar indeed. All I remember is going to sleep and feeling very groggy when I woke up.

So what was that all about? Goodness knows. Mind you, when I’ve been washing myself lately I could swear that there’s less of me in one particular area than there used to be. Something seems to be missing – or maybe I’m just imagining it.

At least they feed me regularly. Not regularly enough mind you, and the quantities are far smaller than I should be getting if there’s any justice in the world. I have done my best to put this right, by jumping on the dining table and trying to grab more food off the plates that the people are eating from, but this never seems to go down too well as far as they are concerned. I wonder why?

There are three people in my new home, one of whom – the older man – spends more time in the place than the other two, who go off in the car most mornings and come back in the evenings. The older man spends a lot of time in a room upstairs, tapping away on a keyboard and looking at a screen.

I like keyboards. I find that if I want to get someone’s attention I only have to jump on a keyboard and I get all the attention I want. To be honest, somewhat more than I really want, if truth be told. 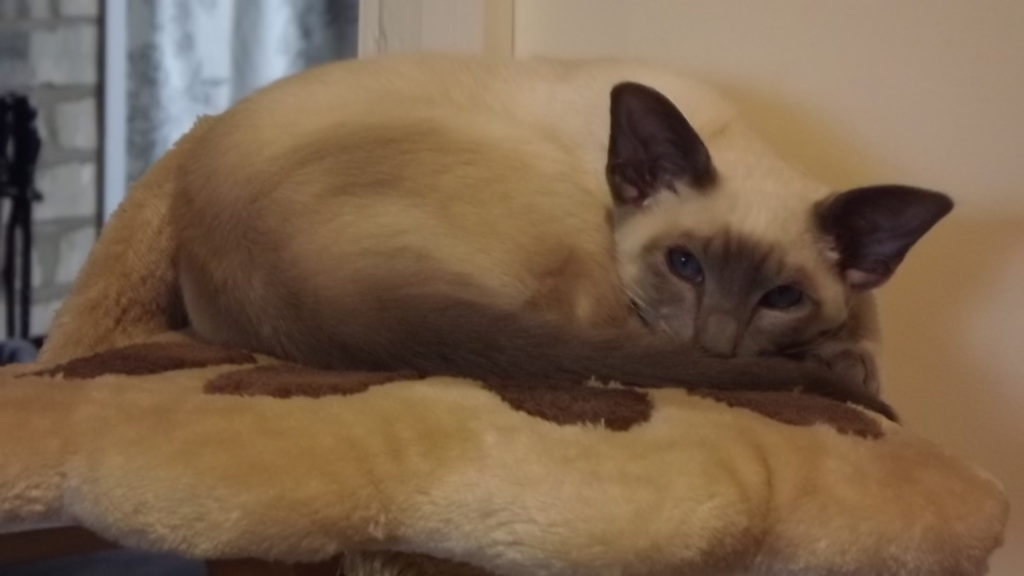 Can I let you into a secret? We cats can read. We’re very good, for example, at reading price labels on tins of cat food, so we know straight away if people like you are trying to fob us off with the cheap stuff. But it’s more than that, because we understand English and can read everything you are putting on those screens of yours. We have several languages of our own, and when we jump on a keyboard you will see examples of our written language appearing on the screen in front of you. Unfortunately you are simply too stupid to understand it.

Anyway, the important thing about the room where the man does his keyboard tapping is that there is a small cabinet against one of the walls and on the cabinet is a square box that consists entirely of windows. This means that you can see everything that is inside the box, and what I have seen is very interesting indeed.

You see, dashing round inside the box are several brightly-coloured little things that spend most of their time darting all over the place. There’s a piece of wood in there, some plants, and stones with holes in them. Don’t ask me how many dashing things there are – I said that we cats could read, not count. 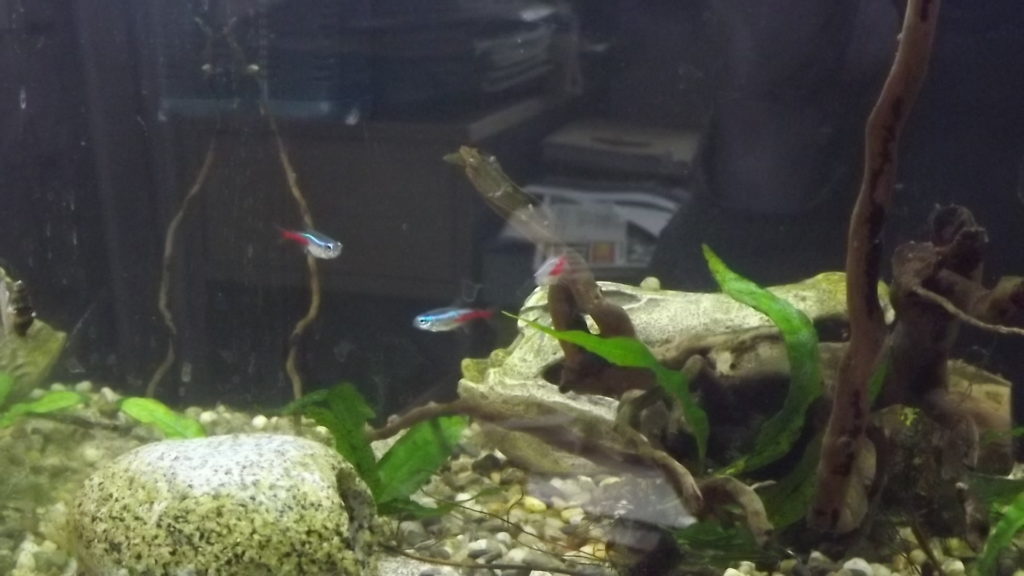 It strikes me that these dashing, flashing things could be good to eat, and I could really do with a supplement to my diet. There’s only one way to find out, and that’s to catch them when there’s nobody there to stop me. What I need is a plan.

As luck would have it, my man has given me an idea, although I’m not sure that he really meant to.

A few days ago, when I was in his room, he started tapping away but then stopped doing so and just stared blankly at his screen. This intrigued me, so I hopped on to his knee and looked at what he had written. There was just one sentence there, and no more.

This was: “The killing in the shadows went well”.

Being extremely intelligent, as all cats are although we try to hide it if we can, I soon worked out what he was up to. This must be one of those writing exercises he does for that writer’s group he belongs to. I understand that they sometimes give their members a line and suggest that they write a story – or something similar – based on that line. What my man usually does is tap it on to the screen and wait for inspiration to strike, although that can sometimes take quite a long time. That is hardly surprising – after all, he’s only human and not possessed of the super-intelligence bestowed on cats like me.

On this occasion he appeared to be completely stumped, with no ideas coming to him at all. However, I got an idea in no time flat. I now knew how to make my killing – out of the shadows.

You see, these flashy dashy things in the glass box are only like that when the light on top of the box is switched on. I’ve noticed that when my man turns off the light they behave completely differently. They just drift about – presumably they go to sleep. I can also assume that the less light there is, the more asleep they will be. Also, if the room is in deep shade they won’t see me coming and I’ll be able to take my chance.

I’ll have a go tonight, and report back to you later.

It did not go well. That line my man wrote on the screen was a complete and utter lie.

The plan went without a hitch at first. With the room in darkness and all the family fast asleep in bed I was able to get on to the cabinet and in a position to swipe a paw into the box and hook out the first of my midnight snacks.

But when I did so I suddenly realized that the dashy flashy things lived in … water! Now, water’s OK to drink but that is as far as it goes. I really, really hate getting my paws wet and have to shake them for ages should I accidentally put one in my water bowl, for example.

And there was no way I could grab any of the flashy dashies without getting my paw extremely wet. This was a dilemma – was I prepared to risk a wet paw for the sake of extra food?

Actually, it was not a dilemma over which I pondered for long, because the shock of realizing this made me lose my balance of the edge of the box. In I went – all of me, that is, and not just a paw.

As you might imagine, the result was utter chaos. I scrambled out as fast as I could, soaked to the skin, and rushed downstairs yelling my head off. Of course, this woke everyone up and it soon became obvious to them what I had been up to. Naturally, I was in big trouble, and I’m not sure that I’ll be forgiven anytime soon.

Apparently the flashy dashies are called fish. Yes, fish are good to eat, but the man told me that these particular ones are there purely to be looked at and would make me very sick if I did actually manage to eat one. Do I believe him?

The mess I made took quite a long time to clear up, but it seems that the fish survived. I won’t be trying that game again.

Mind you, out in the garden there are these things that fly around above my head and sometimes comes down to the ground to feed on the stuff that my people put out for them. There are plenty of shadowy hiding places nearby, so perhaps that is the game to play.

Maybe, just maybe, my people will let me pounce on one of them and take it into the house, where I’ll let it go and watch it fly round the kitchen. Do you think they’ll like that? There’s only one way to find out! 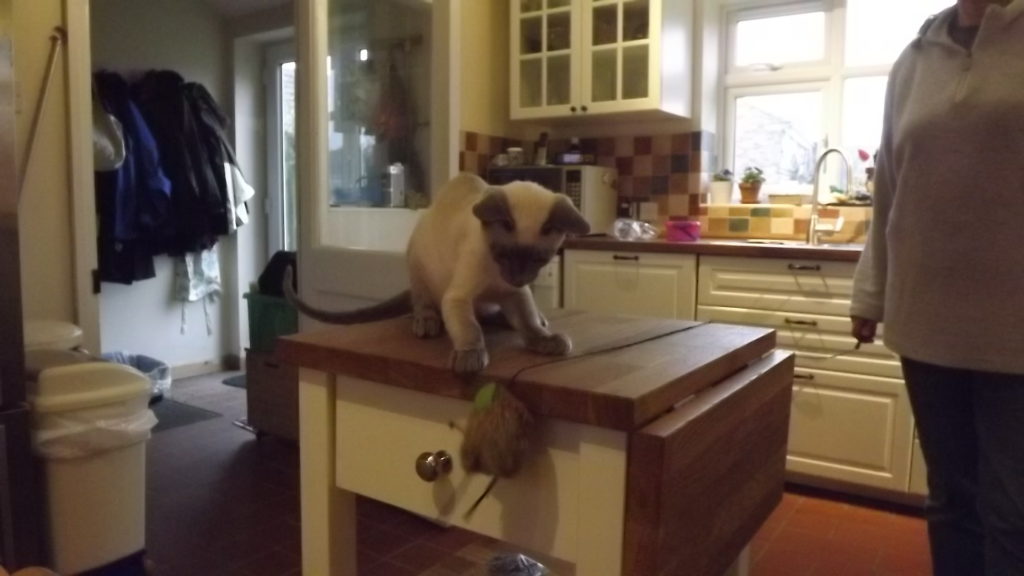