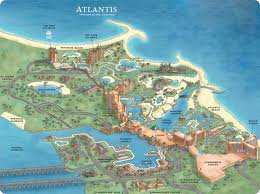 Did the fabled lost continent of Atlantis really exist? It is first mentioned by Plato in 350 BC, in his work Timaeus and Critias. There it is described as an enormous island, “beyond the Pillars of Hercules” (the Straits of Gibraltar).  On this island, civilisation reputedly flourished long before Athens was founded in 9600 BC. The inhabitants were  great engineers and  aggressive warriors, harassing early European  and Asian civilization until the Athenians finally conquered them on their own territory. At that point great floods overwhelmed  the island, and both the Athenian arm  and the Atlantean civilization disappeared beneath the ocean in a day and a night.

Plato describes their culture and territory in detail, setting the pattern for all future Utopian literature, which is indeed what all his writings on Atlantis were considered to be for roughly 2000 years.  However in 1882 the American senator and theorist Ignatius Donnelly published a book suggesting that Plato’s “fable” was based upon a real civilization. He pointed out that scientists were now relatively certain that continents do appear and disappear beneath the waves and that earthquakes and volcanic activity  are capable of terrible damage.

Atlantis has also been associated with Lyoness, the sunken area of land between Land’s End in Cornwall, at the South West tip of England, and the Scilly Isles. Regular patterns of stones and carvings found on the sea bed near Bimini in the Bahamas have been identified as Atlantean.  It has also been theorized that the Greek island of Santorini is Atlantis, since it is a volcanic island that last erupted in 1500 BC and sent out a tidal wave that devastated many surrounding islands. However one of the problems with this hypothesis is that Santorini is on the wrong side of the Pillars of Hercules, which have been argued as being at the southernmost promontories of Greece. This does not tie in at all with Plato’s account of the area.

It suggests that Santorini is only marginally more likely as a site for Atlantis than Cornwall, Southwest England. The legend still fascinates but without more positive evidence it can’t be regarded as historical fact.