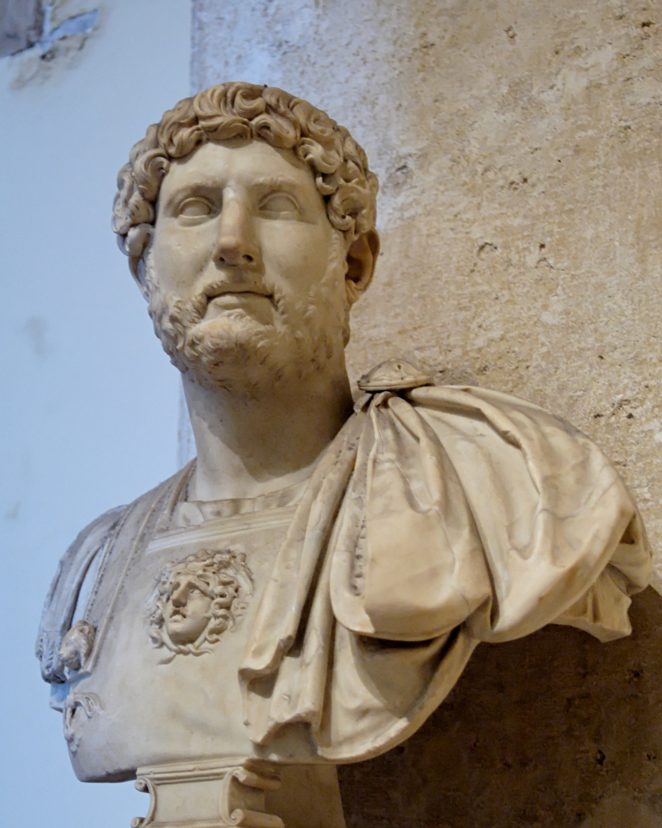 Emperor Hadrian became ruler of the Roman Empire on 8thAugust AD 117 when his adoptive father Trajan died of a stroke at the age of 63.

Trajan had ruled for nearly 20 years, much of which he had spent on campaign expanding the borders of the Empire. Hadrian took a different line in that he preferred to consolidate his father’s conquests rather than make new ones. However, that did not mean that he did any less travelling – he spent most of his 21-year reign on the move. During these travels he commissioned many building projects, not all of them being military defences.

Four of Hadrian’s major projects that have survived to the present day (in various states of repair) testify to the vision of one of Rome’s greatest “constructing emperors”.

The Pantheon in Rome had originally been built during the reign of Augustus, in BC 27, but Hadrian rebuilt it and included the magnificent dome, 141 feet in diameter, that was the largest such structure ever built before the 20th century. The Pantheon is now a church, having been used in the past for the burial of notable people including Italian kings and the artist Raphael.

Hadrian built his own tomb in Rome on the banks of the Tiber, this being the massive drum-shaped building, over 60 feet high, that is known today as the Castel’ Sant’ Angelo. This name dates from 590, when, during a procession of prayer for the ending of a virulent plague, Pope Gregory claimed to have seen a vision of Saint Michael, sword in hand, hovering over the top of the building. The plague promptly ceased and Hadrian’s tomb has been the “Castle of the Holy Angel” ever since.

The castle has had various uses down the centuries, including a place of refuge for besieged popes and a prison. The composer Puccini used it as the setting for part of his opera Tosca, his tragic heroine leaping to her death from its battlements. It is now a museum of military history.

Hadrian spent ten years supervising the construction of his magnificent palace at Tivoli, about 18 miles east of Rome. The complex covered some 750 acres and included gardens, theatres, libraries, pavilions and dining halls. It was further extended and developed by later emperors and the ruins – many of them substantial – are now preserved as a UNESCO World Heritage site.

The same status applies to the work for which Hadrian is best remembered, namely the wall that bears his name in northern England. Begun in AD 122 and still not complete when Hadrian died in AD 138, it stretches from coast to coast for 73 miles and was designed to mark the northern limit of the Roman Empire. The wall was up to ten feet wide and fifteen feet high, although what is left to be seen today is much less substantial due to centuries of local re-use of its carefully crafted stone facing blocks, of which it is estimated that a million were originally used in the construction of the wall and its attendant forts.

Hadrian died of natural causes at the age of 62, in a villa on the Bay of Naples.