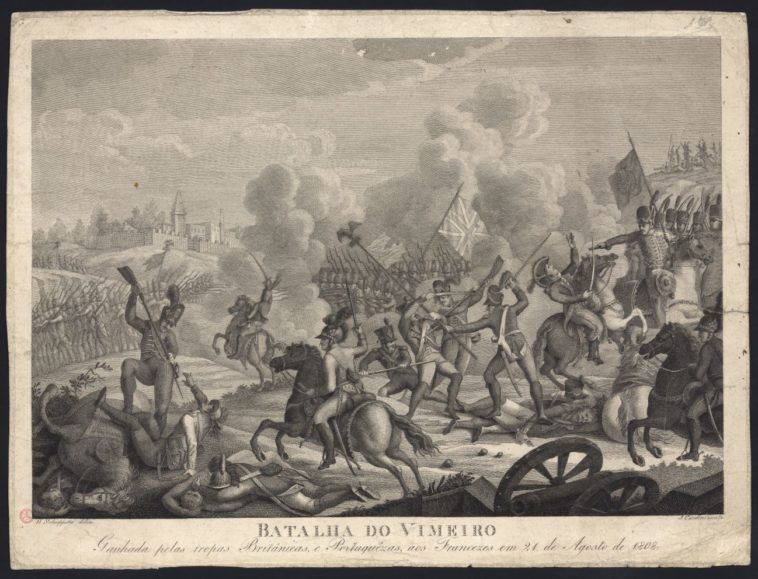 The story of the 1808 Convention of Cintra is an excellent example of why incompetent people should never be allowed to be in charge of anything as important as an army. However, the lessons are not always learned, and lack of ability did not cease to be a bar to promotion for many years after the affair in question.

The convention was a treaty drawn up after an early British victory in the Peninsular War fought against the forces of Napoleon Bonaparte. The war was fought to support the Spanish and Portuguese forces that had revolted against the French invaders.

The Battle of Vimeiro was fought on 21st August1808 between the British army led by General Arthur Wellesley (who would later become the Duke of Wellington) and the French under Major-General Jean-Andoche Junot. The latter had invaded Portugal in November 1807, being largely unchallenged until the British Expeditionary Force arrived in August 1808.

The French were soundly beaten at Vimeiro and forced to withdraw, their losses amounting to more than 2,100 casualties (killed and wounded) as against the British 750. The French withdrew, but the British declined to pursue them.

The reason for this lack of a follow-up was that Wellesley was relieved of his command immediately  after the battle, that role being assumed firstly by Sir Harry Burrard and then (only one day later!) by Sir Hew Dalrymple. It was not that Wellesley had done anything wrong, merely that the rules of military precedence decided the pecking order.

Sir Hew Dalrymple came from military and aristocratic stock, the latter guaranteeing that he would rise rapidly through the ranks as an army officer. He was therefore a captain at the age of 18 and a lieutenant-colonel when aged 31. His experience of military action – although not entirely absent –was not extensive, and he had spent the two years before the Portuguese adventure as Governor of Gibraltar. His appointment as Commander of the Portuguese Expedition was therefore entirely unconnected with any direct experience of what had gone before, and he turned up find Wellesley on the point of pursuing the defeated French towards Lisbon.

The Convention of Cintra

Sir Hew’s first action was to tell Wellesley to stop what he was doing. Instead, Sir Hew drew up a treaty that was duly agreed and signed by Major-General Junot.

Under the treaty, Sir Hew arranged for the entire French army, together with its equipment and goods previously looted from the Portuguese, to be given a free ride back to France, conveyed thither in British ships. Presumably Sir Hew thought that this was the gentlemanly thing to do, but he appeared to suffer from the delusion that the French would accept the deal in the same light. However, there was absolutely nothing in the treaty to prevent the French from coming straight back again, which of course they did.

The absurdity of this convention was not lost on the British government, which promptly recalled all three commanders back to London, given that the other two had concurred with Dalrymple’s decision.

An enquiry was held, due to the derision that the convention had caused, but no disciplinary action was taken against the three men. However, Burrard was too embarrassed to seek another commission and Dalrymple was never offered one.

The only person to escape with his reputation unscathed was Wellesley, who had not actually signed the convention document. His experience and record of military success was too valuable to be discarded and he returned to Lisbon in April 1809 as supreme commander of the British forces. He continued to fight a long and arduous campaign in the Peninsular that was eventually successful.