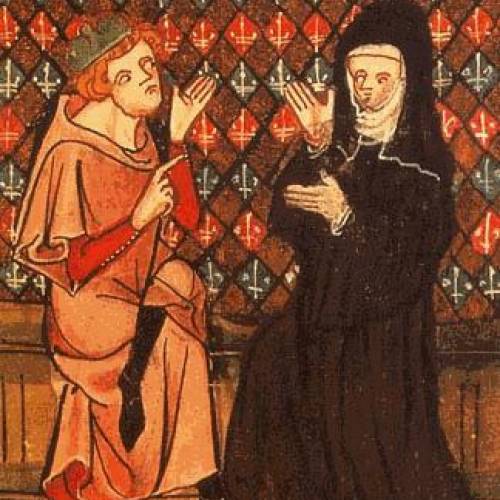 The tragic love affair of Abelard and Heloise is one that has been recounted in many versions down the centuries.

Peter Abelard was born in 1079 near Nantes in Brittany. He was a brilliant academic in the fields of philosophy, theology and logic and became, after many struggles, the master of the school of Notre Dame in Paris.

When he was about 40 he was entrusted with the education of the niece of Canon Fulbert of Notre Dame, this being Heloise, who was around 19 or 20 at the time. The two fell in love and a child was born, named Astralabe. They married in secret, but the relationship between Fulbert, Abelard and Heloise became extremely difficult.

Abelard took the view that the best thing would be for Heloise to go the convent at Argenteuil, where she would be safe from her uncle, but Fulbert regarded this move as Abelard abandoning Heloise and he sent a band of thugs to Abelard’s house where they castrated him.

Abelard became a monk at the abbey of Saint-Denis and Heloise, most reluctantly, became a nun at Argenteuil. She later became the abbess of a religious community called the Paraclete, which Abelard had founded.

While at Argenteuil, Heloise wrote a number of letters to Abelard, these being poignant declarations of love and entreaties to be relieved of what she saw as an enforced exile.

Abelard continued to teach but he eventually fell foul of the authorities and was forced to retire to the Benedictine abbey of Cluny in Burgundy. He died there in 1142, aged 63, but was buried at the Paraclete.

Heloise lived for another 22 years, apparently always regretting the loss of her love, whose grave she could visit every day. She was buried next to Abelard, although they were both moved to the Pere Lachaise cemetery in Paris in the 19th century.

Looking back to the 12th century, it is difficult to reconcile modern sensibilities with those that would have been current at the time. It is however quite clear that Heloise would much have preferred to live as a wife and mother than be a nun. But what did Abelard think and feel?

At one level he was apparently content to retreat to the world of academic discourse, but he did not forget about Heloise. At the time of the founding of the Paraclete the two of them worked together, which included Abelard writing hymns for the nuns to use. The attitude of both of them seemed to be one of resignation and regret rather than bitterness.

Who was right? Who was wrong? What course should they have taken? The debate has continued for nearly 900 years!