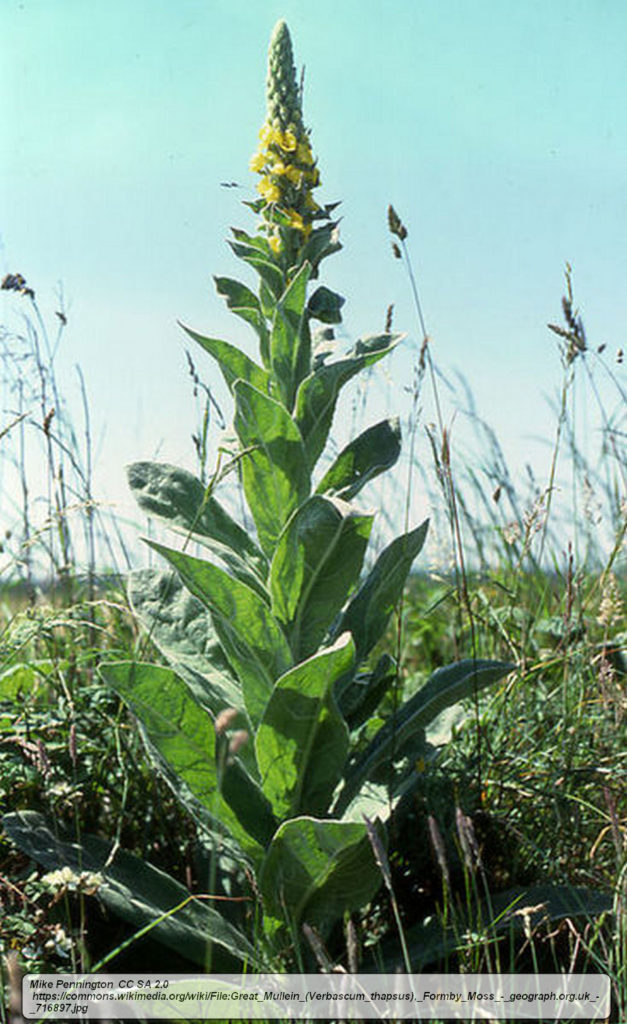 Great mullein (Verbascum thapsus) is a biennial plant that occurs throughout the temperate areas of the world. Although the ‘great’ in the name is probably a reference to the height of the mature second-year plant, it could also be applied to the medicinal usefulness of this wild herb. 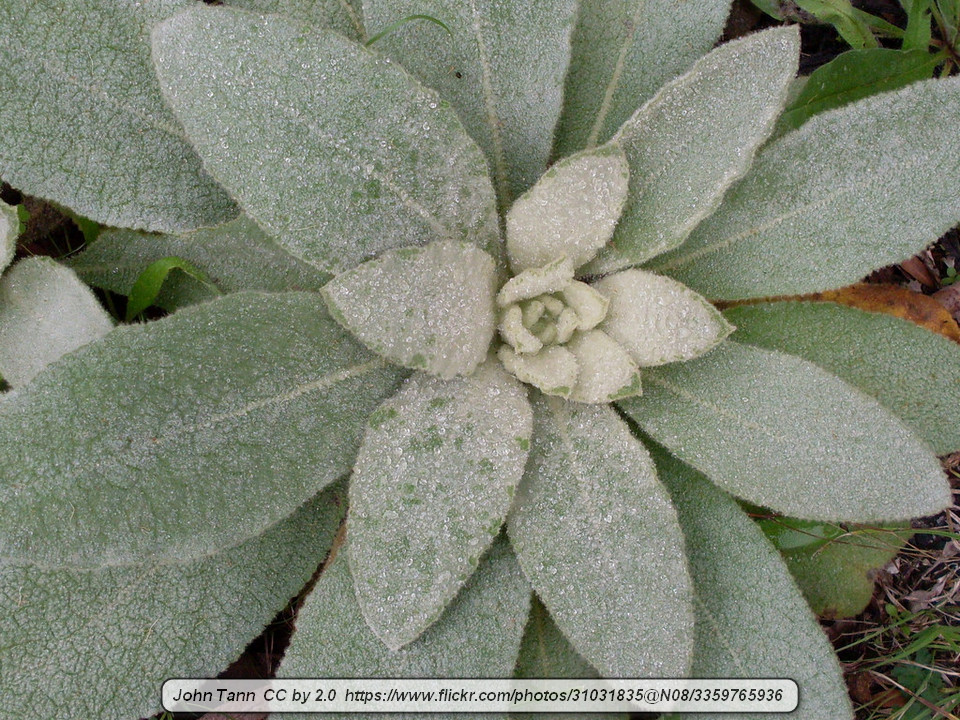 In the first year of growth, mullein grows a rosette of leaves that are close to the ground. The leaves are thick and large, occasionally growing a little less than a half a foot wide and up to a foot and a half long. They are roughly oval in shape and bluntly pointed. From a distance, the plant looks pale whitish-green. This is largely because of a dense covering of whitish hairs that blanket the leaf, giving the leaves a soft, fuzzy feel.

In the second year, a flower spike forms from the center of the rosette of leaves. There are also leaves on the flower spike, but they are smaller, spaced out and the size of the leaves diminishes the higher up on the spike that they are located.

The flower spike can reach a height of greater than eight feet, depending on growing conditions. At the top of the spike, which sometimes branches in a way that is reminiscent of Saguaro cactus, the flowers are located. These are densely packed together and when they open, the color is sort of a faded out sulfur yellow. Although not especially attractive, though some people find them beautiful, the flowers contain a sweet sap that is highly attractive to insect pollinators, particularly bees.

Where Mullein is Found 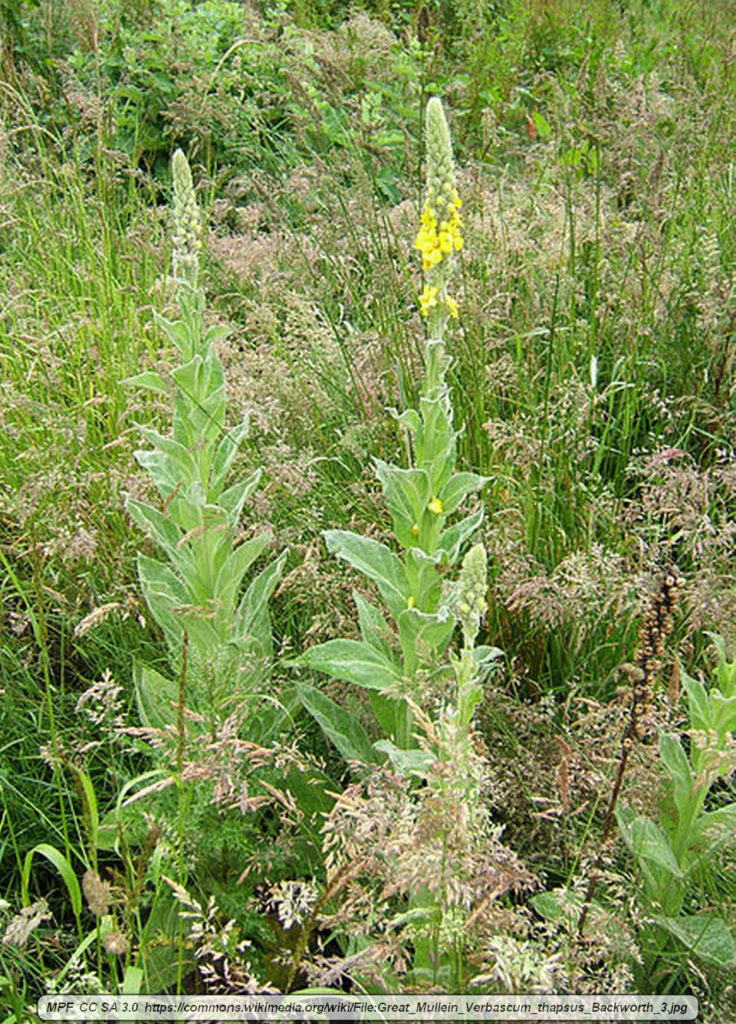 Mullein is a drought resistant plant that prefers dry soils and full sunshine. It is found in waste places, along roadsides, fence rows, vacant lots, fields and practically everywhere that has soil that drains well and dries out, and which gets lots of sunshine. This plant grows from the lowland coastal areas to mountain valleys.

In addition to being found in North America, where it grows profusely, great mullein also grows in Europe, the UK, Central and Western Asia and North Africa, according to Botanical.com. 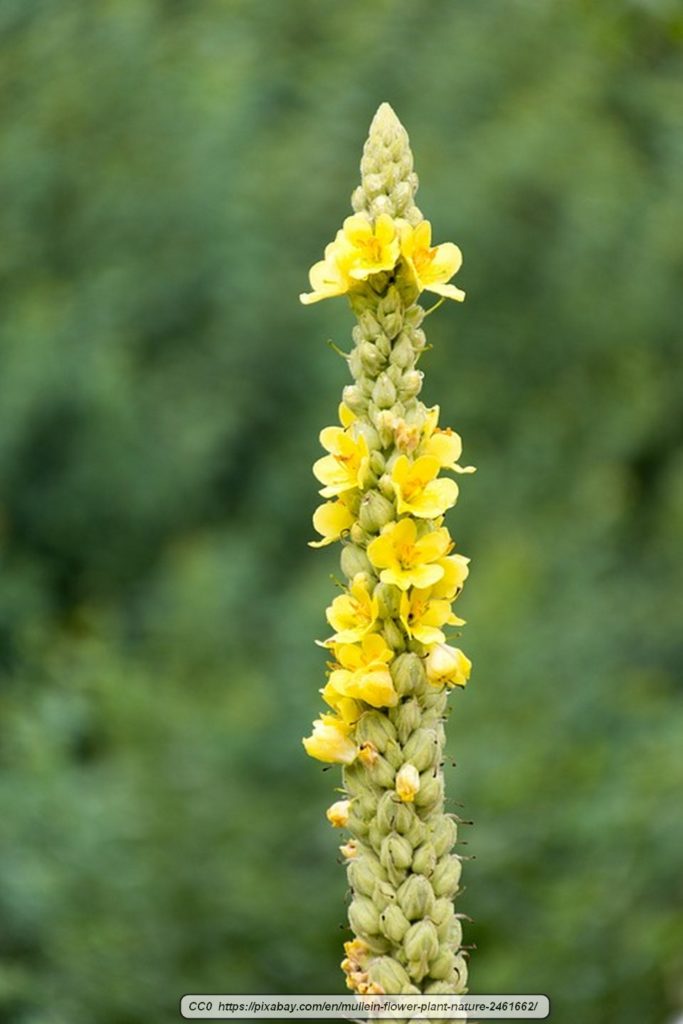 For a very long time, Native Americans have used tea made from the leaves to combat all forms of coughing and chest congestion or breathing complaints. This includes asthma and tuberculosis. The leaves have been dried and smoked for the same illnesses, too.

The tea has also been used to treat diarrhea, flu, bronchitis, migraine headaches, to ease sore throat pain and to calm chest pains. The tea is sedative and is also used to promote rest and sleep.

Externally, the leaves are also used in tea form or as a poultice to treat cuts, scrapes, punctures, insect bites, ulcerations, boils, sunburns, burns, and hemorrhoids. This plant also has insect repellent and anti-fungus properties. It has been used to treat athlete’s foot, toe fungus, and ringworm.

The pain-relieving properties are noticeable whether used externally or internally.

An essential oil is made by chopping and crushing the leaves, then covering them with olive oil. This is put into a container and is capped and shaken once a day for two weeks. The leaves can then be strained out. The oil is useful for earaches, cold sores, and toothaches. This essential oil has strong anti-bacterial properties.

To make the tea for internal uses, put one ounce of the leaves in a tea ball. Put this in two cups of milk and boil it for five or ten minutes, covered. The tea can also be made with water, which is useful for external applications. The regular internal dosage is a shot-glass full as needed.

This plant has been researched in regard to its medicinal properties and those properties have been confirmed by researchers. Among the active ingredients, great mullein contains are Coumarin and Hesperidin.

Coumarin is an anticoagulant also found in cinnamon and tonka beans. People with bleeding disorders or who are already taking blood thinners or anticoagulants should not use mullein internally without consulting with their doctor. (The man-made version of coumarin is Warfarin.)

Great mullein is a wild medicinal plant that has a lot of uses. It is widespread, so it isn’t difficult to find, yet it is so useful in treating so many ailments that it lends extra meaning to ‘great’. Great mullein really is great.