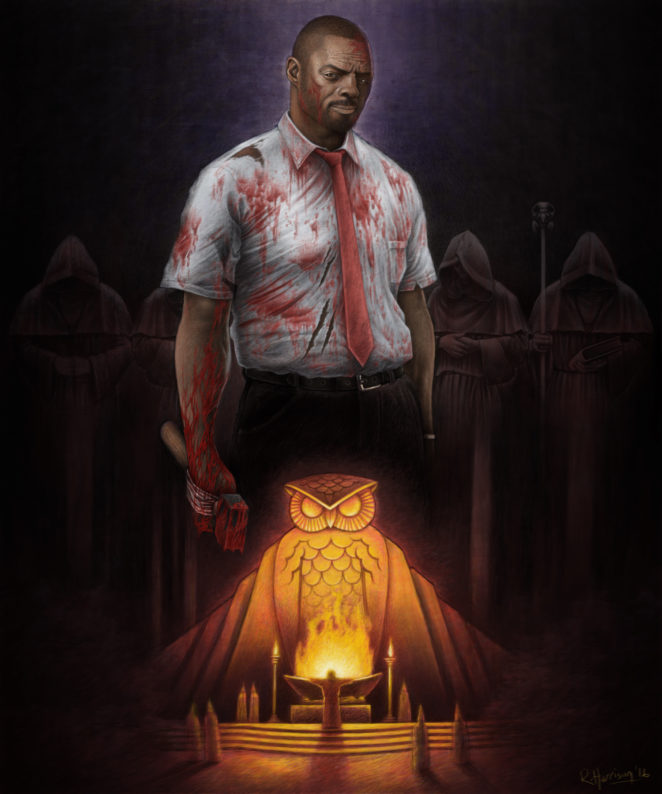 Cover Art for graphic novel series. The Dead Reserves. which follows the global adventures of the members of the Post Live Adjustments agency. A team of talented people, all of whom can channel the dead to aid them in the various cases they’re working by using totemic artifacts connected to the deceased. This character is called Leonard Lime, he`s a jaded optimist. A sometimes gambler. A weekend dad and a man with a peculiar talent.He’s also co-partner of Lime And Hattridge Post Life Adjustments – A specialist agency that work out of London and have branches in Sydney, New York, Hong Kong, Dublin and Belfast.The artwork was created from scratch on photoshop using photo reference. Leonard is based on movie actor Idris Elba, and for the pose I used the movie Falling Down starring Michael Douglas. This story features Leonard infultrating a cult ( which is loosely based on the conspiracy theories surrounding Bohemian Groove, and the infamous Alex Jones undercover video )

The Dead Reserves is a graphic series, created by W.D. McQuaid. He creates a world and brings together various artists to fill out the world.