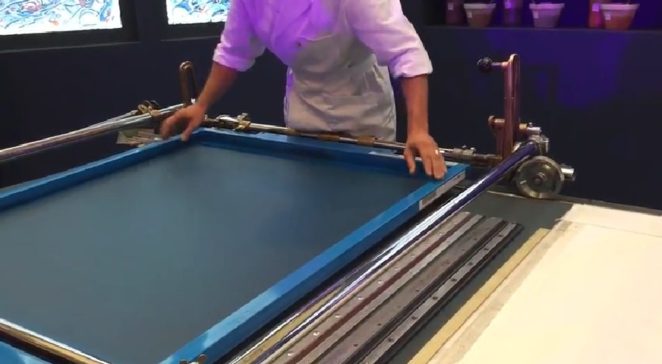 On Sunday and Monday, I dropped by South Coast Plaza to check out the demonstration on how they make a Hermes Scarf, which is mostly focused on painting a silk sheet with a particular design, colors, and pattern. The following videos display the process, from beginning—which is about setting the silk sheet in place, until the end process—in which the whole sheet is painted, in this case, in an ocean design.  I did these videos on Sunday, but I went on Monday, during a different time, in which they were doing a different design—which is about astrology, as well as they used different colors, but still using the same process.

Notice each different board looks like it has a different stencil design, which creates an added layer to the artwork, and eventually all the layered stenciled lines help make up the whole picture, creating depth as making the full scene come alive, filled with action of some sort.

I enjoyed watching the whole process because it was like my graphic design artwork that I do in Adobe Illustrator as well as my manual artwork that I am currently doing on my graphic novel. It is a similar process, but my manual work involves mechanical pencil, colored pencils, colored markers, colored pens, Sharpies, and black and colored ink pens. There is also some type at certain areas, in the center of the scarf as well as at the left corner of the scarf.

The first step involved setting the foundation, or the white silk sheet.

The second step painting the black or dark blue outlines of the artwork onto the white silk sheet.

The third step involves painting the different paint colors and shades via stenciled silkscreen onto the white silk sheet.

The 4th step involves finishing up the scarf.