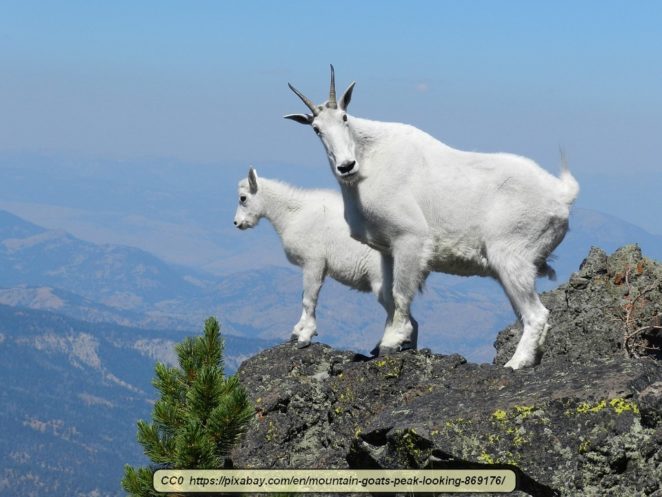 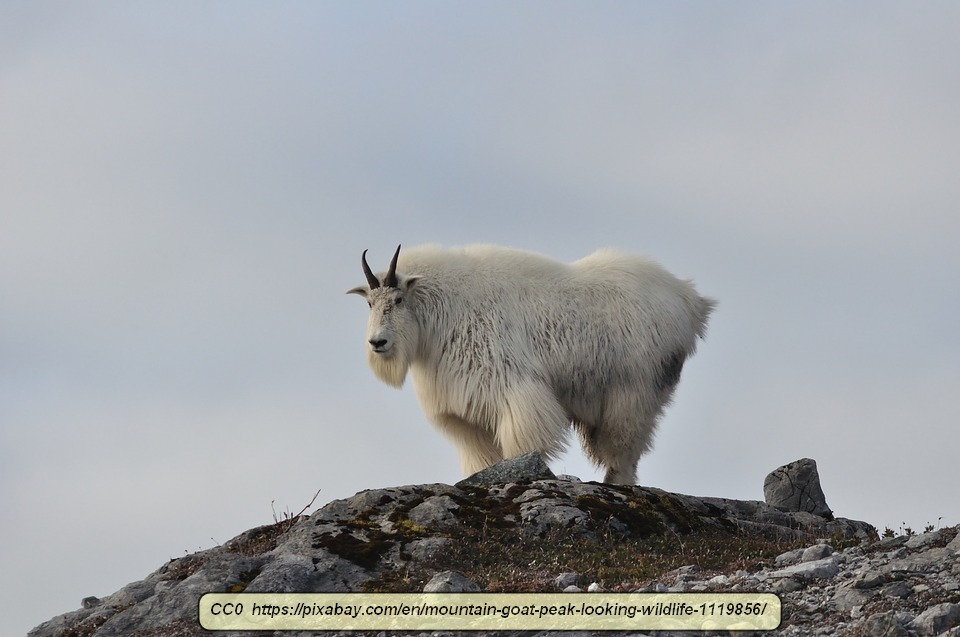 More often just called the mountain goat (Oreamnos americanus), these animals actually aren’t wild goats. Wild goats are in the genus Capra. Mountain goats are more closely related to gazelles and antelopes than they are to wild goats, although they don’t look much like either gazelles or antelopes. (We’ll still call them goats here, because of their common name.) This is the only species in the genus, Oreamnos. 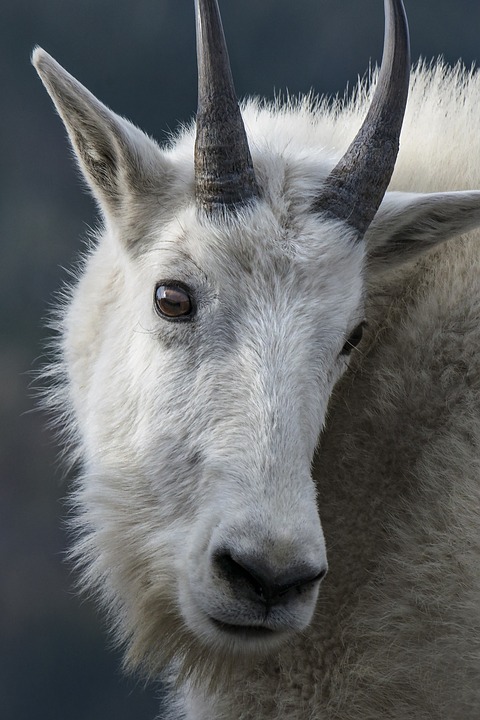 These goats have white wool in a double layer, to help them withstand sometimes intense cold and to blend into snowy terrain. The inner layer of wool is hollow, further insulating the animals, rather like the fur of polar bears and moose.

Both the billies and the nannies (males and females) have horns and beards. The horns are black, up to nearly a foot in length and backward curved. The horns have rings and these can be used to determine the age of the animal.

A full-grown billy can stand a little more than three feet tall at the shoulder and usually weigh about 150 pounds, though exceptional individuals have been recorded that weighed over 300 pounds. The body is up to six feet long, not counting the eight-inch tail. Nannies tend to be a little smaller than billies, with shorter beards and horns. 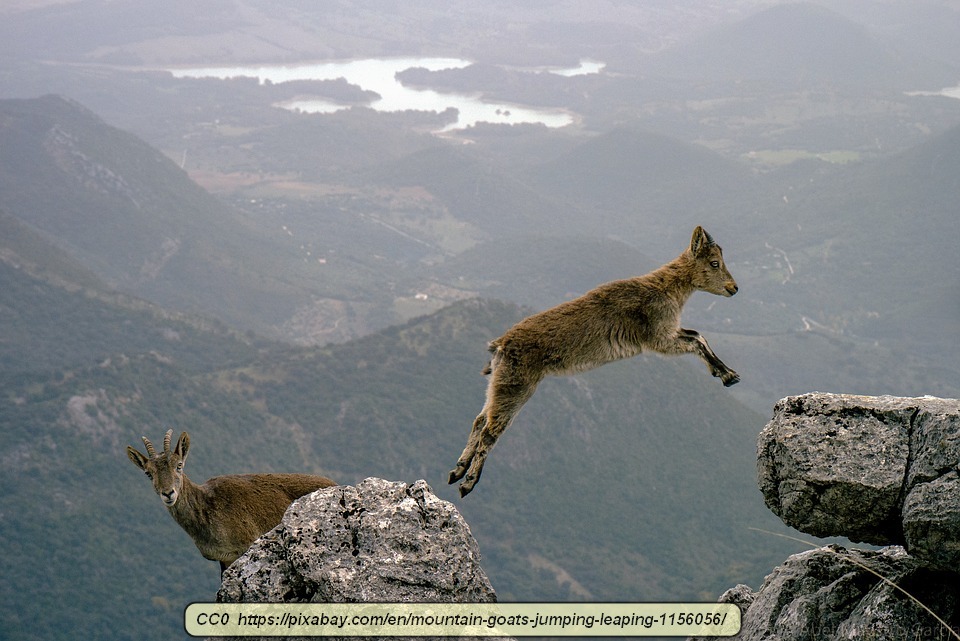 Mountain goats are known for their ability to scale steep and often icy slopes. Their hooves have a stout, hard, sharp point that gives them purchase on even icy slopes that are steeper than 60 degrees. The soles of the hooves are soft and form sort of no-skid surface. Also, since this is a cloven-hoofed animal, the toes can be spread to give them additional traction. This allows them to climb what can appear to be sheer cliffs and to jump from rock to rock effortlessly, even in snowy and icy conditions.

These creatures have few predators because of where they live. They can quite effectively out-climb normal predators and even the young are adept at climbing.

One thing that is unusual about the nannies is that all of the nannies in a herd come into heat at the same time. The gestation is about six months and the six to eight pound kids are born in late May to early June. Within a day, the kids are able to move about and to climb. 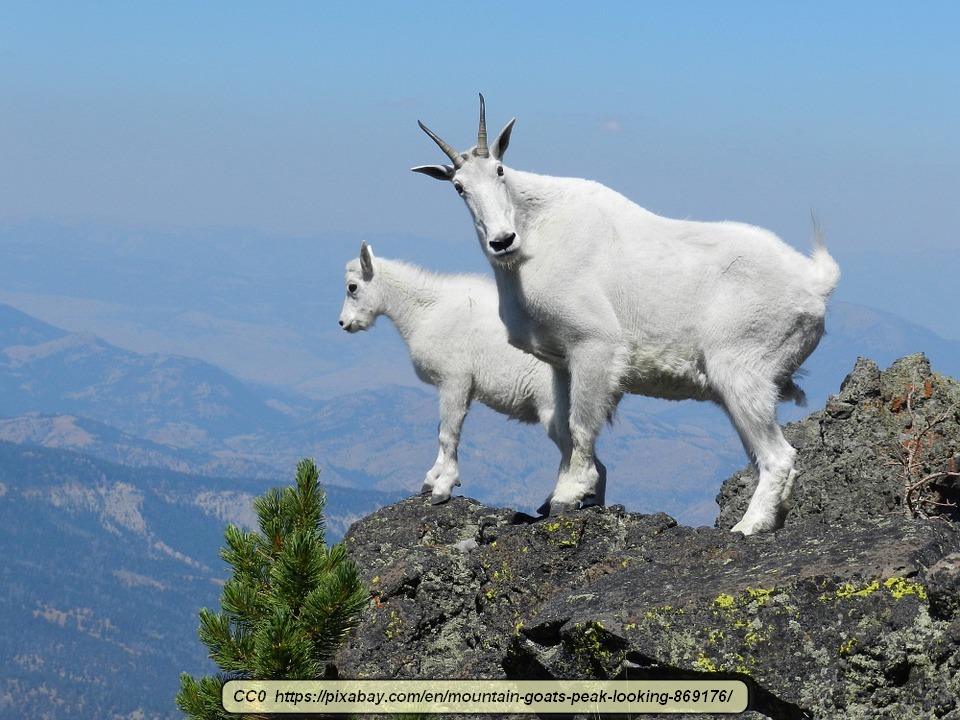 These goats are vegetarians, eating primarily grass, moss, ferns, and whatever forbs they can find. They have been known to nibble and consume coniferous needles and twigs. A great deal of their time is spent foraging for food.

Mountain goat nannies are protective mothers and can sometimes be aggressive when it comes to the protection of their kids. If they can’t lead the kids away from dangers, they will stand over them, lowering their heads, ready to defend the young one.

In the wild, it is rare for a mountain goat to live more than 15 years, because the teeth wear out from eating tough grasses. Tooth loss means that the animal can’t eat and it starves to death. This is what happens to elephants, too, though they are totally unrelated.

Despite the harshness of their environment and the fact that they don’t live a long time, mountain goats aren’t on the endangered species list. Rather, they are listed as an animal of least concern. They are interesting animals, however, and unusual enough that the mountain goat is officially the symbol of Glacier National Park in Montana, where there are an estimated 1,500 Rocky Mountain goats.