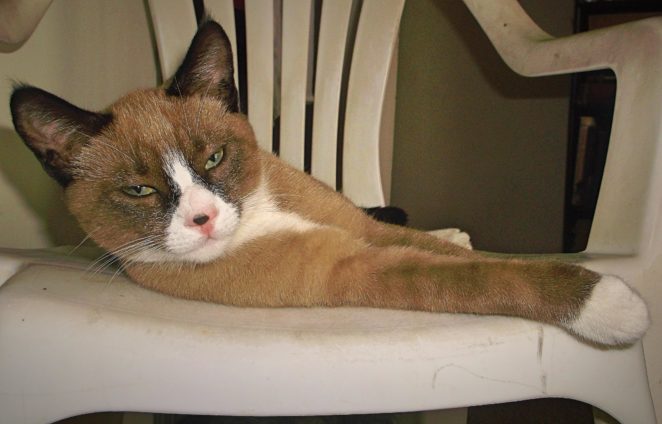 Hi all, this is Trixie, my Snowshoe Siamese. She was born in a litter of all melanistic kittens on March, 26, 2017. Her litter mates developed dark colored pigment in their skin. Melanism is the opposite of albinism.

The were born from an all melanistic male and an all grey spotted Bengal. If you know cats she looked like a Russian Blue, with an under coat of spots.

To my surprise Trixie was the last one out and all white. As the weeks went by she started getting siamese markings. Then I noticed her feet, nose and belly were staying white… except for a small spot on her nose.

She is what you call a Snowshoe Siamese. Siamese are actually a form of albinism. Siamese cats were created by crossbreeding the Oriental Shorthair and the Colorpoint Shorhair.

In the 1960’s a breeder, Dorothy Hinds-Daughterty began breeding the Snowshoe. They are rare because the markings are based on a recessive gene for the colorpoint and the co-dominant piebald gene.

Her eyes are blue near the pupil and fades to a yellow..  Here is an art edit I did on a blurry photo.