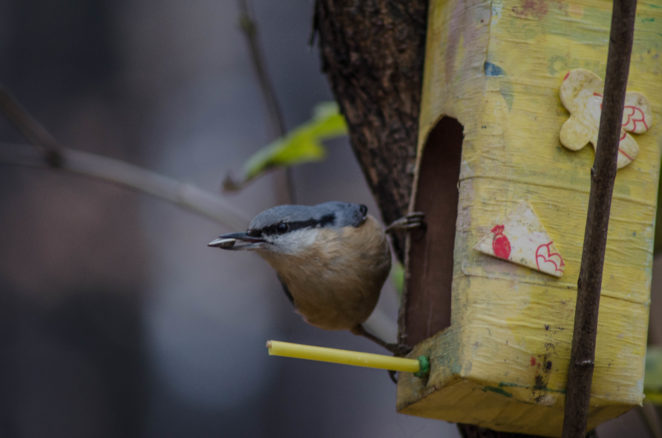 Eurasian nuthatch is a small bird of the order Passeriformes, which occurs everywhere in the temperate latitudes of Europe and Asia, except for Ireland. She is one of the most widespread and most common family members.

Body length – 14 cm. Short tail. At the top, the body is gray in color, with a black band passing through the eye area. Only the tips of the tail feathers are white. The neck area is also white and the abdomen has a chestnut hue.

The forest mason is a constant bird for Bulgaria, which however performs seasonal vertical migrations. In the autumn it descends from the mountains and, together with youngsters, roes and woodpeckers, walks through the plain forests and parks where it feeds.

In the spring, couples re-board the mountains in their nesting areas. It inhabits deciduous forests (especially beech), where it nests on old trees. It feeds on insects, seeds and nuts. The woodcutter is known for his habit of squeezing different nuts into tree cracks, then breaking them with his strong beak. Besides, it has the ability to go down the stems of the trees with the head down !!!, not just climb up like the woodcutters and woodpeckers.

The forester is prone to bird feeders. In such cases, it becomes quite aggressive and throws off other species.