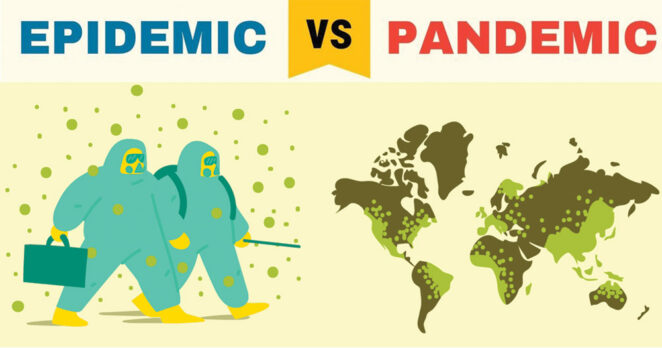 The World Health Organization has termed the Corona virus a universal pandemic, in which two English-speaking words are repeatedly heard, one epidemic and the other pandemic. But in conversation, people usually forget the difference in their meaning by using these words.

Both words end on Greece word demic,  both means, “for people” Both are used more in the event of an infectious disease. The word epidemic was used for SARS virus in 2002,  whereas in March 2020, Corona was declared by WHO as PANDEMIC.

In Greek language , EPI means  For an area. PAN means for all.

Epidemic disease mean, has a sudden and rapid rise in a particular region or population. The seasonal flu behaves more like an epidemic case spike at certain time of the year.

Epidemic through the history.  In 1793 in the US state, Yellow fever killed 5000 people in Philadelphia. In 19th century Cholera killed 1,50000 american people.

when an epidemic disease increases and engulfs several countries, it becomes pandemic. Pandemic not limited to a specific geography or population and usually affect a significant number of people.

In this context HIV/AIDS ranked top in the list. HIV/AIDS claimed the lives of 36 million since 1981 and over 30 million cases still prevalent. After this Spanish flu ranked second,  this virus has infected 500 million with an estimated mortality rate 10-20 %.In 14th century , Bubonic Plaque pandemic, which spread across Europe, Asia and Africa and killed 75-200 million.

epidemicpandemicWhat&39;s the difference between epidemic and pandemic?