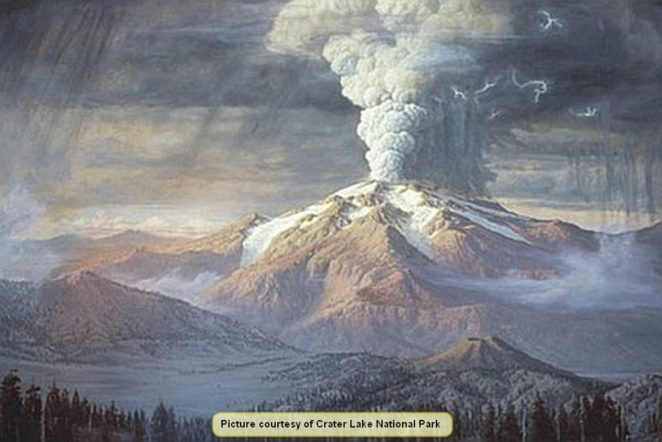 The story of an angry mountain is a true one and some readers might already know the story. It began about 400,000 to 420,000 years ago in the Cascade Mountains.

The Cascade Mountains are a volcanic mountain range near the Pacific Ocean in North America. Many of the mountains in the range are typical shield volcanoes, produced by repeated eruptions that laid down ash and lava.

For thousands of years, it grew, though ice ages came and went, shaping the mountain and creating glacial canyons of surprising depth.

Then, about 7,700 years ago, the angry mountain erupted in a colossal explosion. The eruption sent ash over a thousand miles away, where it can still be found. The contents of the magma pocket in the core of the mountain were released, basically leaving a mostly empty cavity to support millions of tons of volcanic rock.

Without material and pressure to hold the top of the mountain up, the angry mountain’s top collapsed, creating a deep, rugged, bowl-shaped depression known as a caldera.

As time passed, snow meltoff gradually partly filled the caldera with water. At its deepest, the lake is now over 1,900 feet deep, yet the surface of the lake is still about 1,100 feet below the rim of the caldera.

If you haven’t guessed by now, the name of the angry mountain was Mount Mazama and the lake that gradually came into being is now known as Crater Lake, nestled in the national park in Oregon by the same name.

The story doesn’t end there, though. There have been a few minor eruptions since Mount Mazama caved in and one of them even created a cinder cone seen in the lake today as Wizard Island, named by people who thought it looked rather like a wizard’s hat.

For a long time, it was believed that the volcano was extinct and that there were neither inlets or outlets to the lake. Studies in the 1970s determined that there are geothermal vents on the bottom of the lake. This potentially means that there could be an inlet/outlet system and more importantly, it shows that the mountain isn’t extinct. It was then redesignated as merely dormant, which means that it could one day erupt again.

Incidentally, many of the glacial valleys are still there, too, most of them filled with hundreds of feet of pumice. Pumice is a volcanic rock that is the foam on lava that has solidified. It is filled with air pockets, it is very light-weight, it looks rather like a sponge, and it has the distinction of being the only rock that floats on water.

This was where I grew up and it will always be “home” to me.