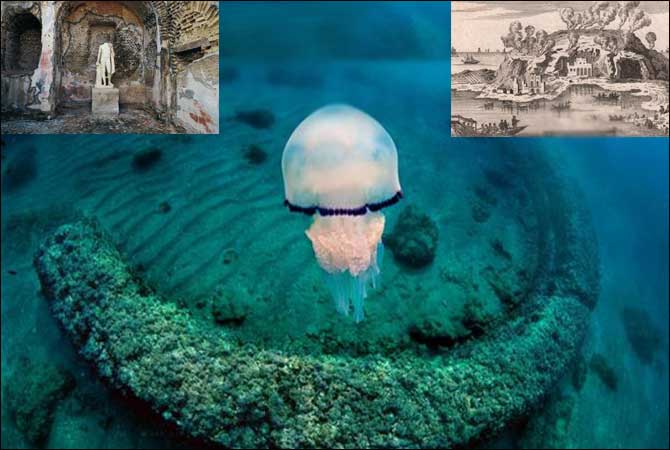 A researcher, John Smout, said, that many of the conspiracy stories are connected with the Baiae. The speculation is that , Cleopatra escapes in a boat after the assassination of Julius Caesar, king of Rome in 44 BC, while Julia Agrippana had planned the assassination of her husband Claudius in Baiae, So that her son Nero could become king of Rome.

The ancient Greeks and Romans believed these rocks as a way to enter the underground world. They also made a kind of cement by mixing lime in rocks that did not affect by water just like waterproof and with the help of that, they built an air dome, a beautiful home decoration, a pond for fish and a refreshing bath.

Baia’s reputation and popularity as a Lounges of luxury but it might not be wrong to say that, the reason for the fall of the town was the volcanoes in the area, due to which the surface of earth rises and stuck in the ground and slowly sank into the water, where its remains can still be seen.

Tourists were not more interested in this place , but when in 1940 a pilot published a photograph taken from the airplane of a ruin under sea, then people become interested in seeing this place.

Twenty years later, Italian authorities conducted a regular survey here to find out more about the underwater city and so the remains of Baiae came out, however, underwater, the city was not given the status of an underwater archaeological site until 2002.

After 2002, it was opened to the public. The ambitions of the city became clear and new features were shed on the luxuries and methods of ancient Roman luxury. These remains are not very much below the sea level, but in some places six meters deep.