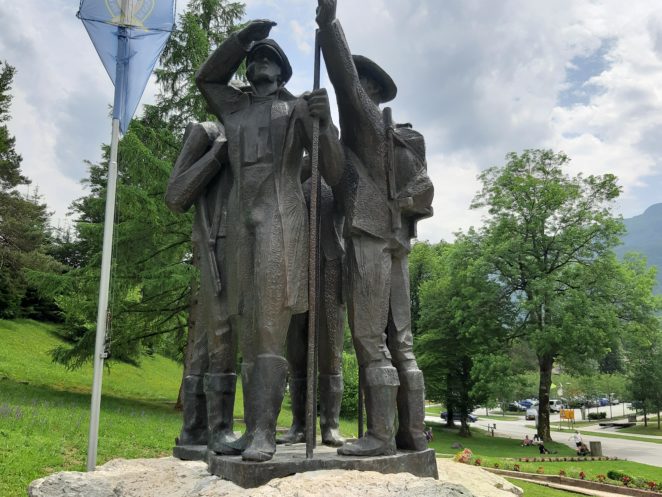 The monument to the four hearts of men is located in Ribčevem Lazu. Around it is a smaller park. It is one of the major sights of the place, next to the church of St. John the Baptist, today under the monumental protection and the statue of the Goldsmith. The monument was erected in 1978, when the 200th anniversary of the first ascent of Triglav was made by sculptor Stojan Batic. It can be seen in front of the Jezero Hotel and is directed towards Triglav, the highest mountain in Slovenia. The first ascent to the mountain was on August 25, 1778. It was made by the local hunter Stefan Rosic from Savica, the early warrior Lovro Willomitzer from Stara Fuzina, and the miners Luka Korosec from Koprivnik and Matevz Kos from Jereka. The initiator and patron of this exploratory ascent was Baron Ziga Zois, a Slovenian entrepreneur, mineralogist and reborn. The monument is protected by the Srednja vas and the Bohinjska Bistrica Mountaineering Association. This was taken in the summer when I visited Ribcev Laz – Bohinj