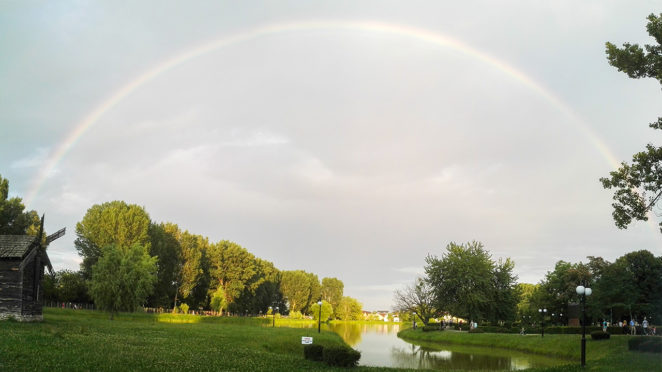 The rainbow is, from a scientific point of view, an atmospheric optical and meteorological phenomenon manifested by the appearance in the sky of a spectrum of the shape of a colored arc when the sunlight is refracted in the drops of water in the atmosphere. Most of the time the rainbow is observed after the rain, when the sun is near the horizon.

Yesterday afternoon it did not rain in Targoviste and that is why it seemed strange to see the rainbow above Chindia Lake. It was strange as well that its presence on the sky lasted longer than usual. Anyway,  I’m convinced that there was enough humidity in the air, otherwise the rainbow could not be seen!! Unfortunately yesterday was one of the days when I did not took the camera with me. That’s why I had to immortalize this bizarre phenomenon with my mobile phone.