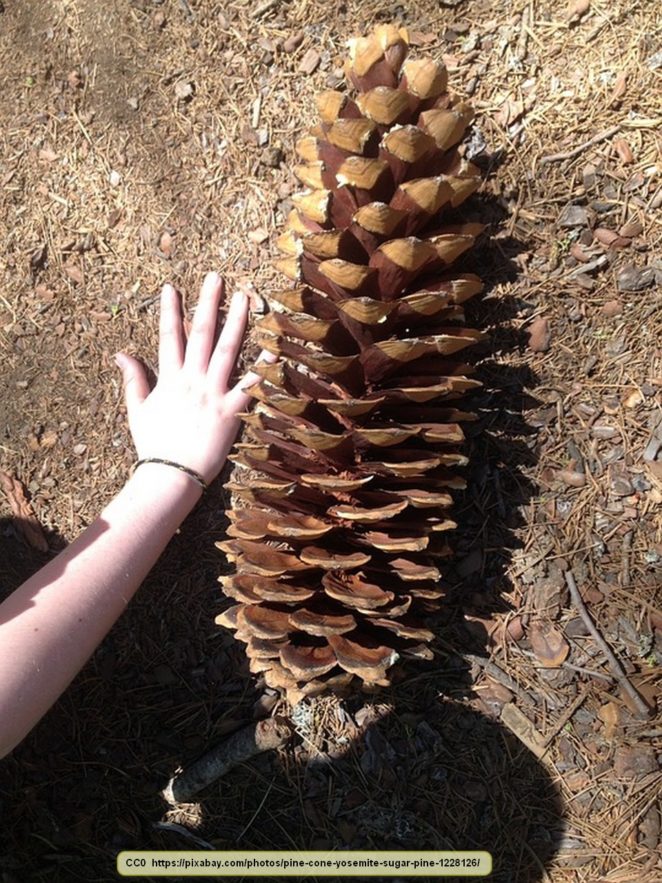 Many kinds of pine trees are relatively well-known. Other kinds are far less heard of. That latter is the case of sugar pines.

Sugar pine trees (Pinus lambertiana) have a relatively small native range. They are primarily found in the mountains of Oregon and California, as far south as Baja.

It isn’t difficult to identify this tree. It tends to be truly massive and is both the largest and biggest species of pine. Sugar pines commonly grow to 195 feet in height, with trunks that measure over 8 feet in diameter. Several sugar pines have been found that were around 250-270 feet tall and eleven and a half feet thick at the base. The tallest ever measured was nearly 274 feet and is found in Yosemite National Park in California. To get an idea of how large this is, the world’s tallest trees, the sequoias, typically reach about 300 feet in height, with extraordinary specimens much taller. Still, sugar pines are nearly as tall as an average sequoia.

The bark is in large, thick scales, with sort of a ‘jigsaw puzzle’ look and is similar to that of Ponderosa pine trees (Pinus ponderosa).

An even better identifier is the cone. Sugar pine cones can be over two feet long and these are the longest of all pine cones.

The common name for this tree comes from the sweet, sappy resin or pitch that these trees produce in abundance. The sticky, pleasant-smelling pitch is found on the bark, wood, and cones, so it is nearly impossible to pick up one of the cones without getting some pitch on your hands. As can be seen in the picture, each of the scales on the cone is tipped with pitch.

Sugar pines are one of the trees I remember well, with a good deal of fondness because I love how they smell. They grow in abundance in the southwest part of Crater Lake National Park. Even the smoke from the wood, when it is burned, is good-smelling. I haven’t tried it and I don’t know of anyone else who has, either, but the pitch should be great for making incense out of. As kids, we’d occasionally collect the cones for use in holiday crafts.