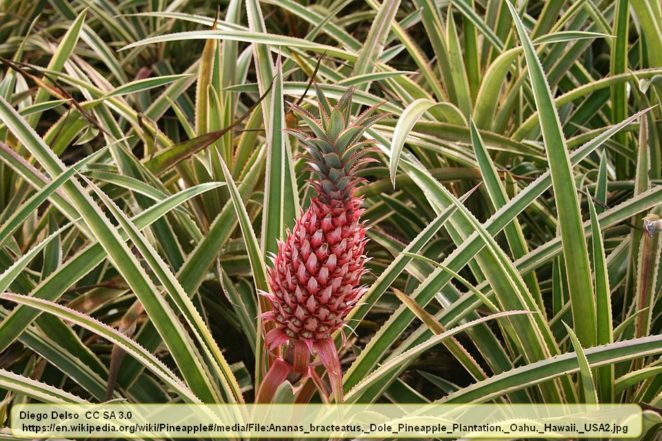 Pineapples are obviously misnamed. The plants are totally unrelated to either pines or apples and the fruit isn’t anything like an apple. Have you ever wondered how pineapples got their name?

Pineapples got their name in the mid-1600s and it wasn’t given the name because of the similarities between the plants and pine trees. For one thing, pineapples are bromeliads, not trees. Rather, they were named because of the resemblance, real or imagined, between pineapple fruit and pine cones.

So why wasn’t the plant called a pinecone plant?

That is the interesting part. The old convention was to call any fruit, especially those that were unknown, ‘apples’. Thus, the fruit that Eve ate and gave to Adam to eat, dooming mankind, is still often called an apple, although it almost certainly wasn’t an apple at all. More likely, it was related to pears.

As late as the 1500s, the fruiting body of a pine tree, what we now call a pine cone, was called a pine apple because of that old convention. When the bromeliad we now know as the pineapple was first seen by old-world botanists, the fruit reminded them of pine apples; again, what we now call pine cones. As a consequence, the plants and the fruit were called pineapples, even though the plants weren’t trees and were totally unrelated to either pines or apples.

Later, to clarify what was being referred to, the fruiting body of pine trees became known as ‘pine cones’. That way, there was no confusion over which plant a ‘pineapple’ was referring to.

The picture is of a red pineapple, and it does rather look like a pine cone.