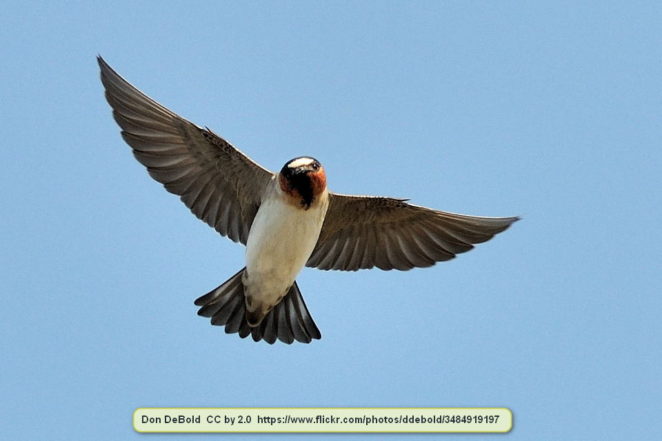 More than once, I’ve gone fishing and have almost immediately said, “Great, the fish will be biting!” I’ve had people quizzically ask, “How do you know that? You haven’t even gotten your hook wet.” My reply has been, “Look at the swallows.”

What I’m most often talking about are the cliff swallows, though barn swallows have the same traits. Swallows are small birds, usually not much more than 5 inches long.

These little birds eat insects while in flight. The flight is somewhat erratic, but graceful, as they dart after flying insects. It is this trait that tells me that the fish are going to be biting.

Conversely, if the swallows are flying high, the fishing is likely to be hit or miss. There usually aren’t enough insects close enough to the water to initiate a feeding frenzy in the fish.

This kind of swallow builds a mud nest, usually on the sides of natural cliff faces, hence the name. They prefer vertical surfaces for the nest. They will often build nests under the overhangs on bridges because it is vertical. For whatever reason, road departments routinely destroy the nests and complain about the birds, though they actually do no damage to the bridge and are helpful in keeping the insect numbers in check. Occasionally, cliff swallows will even build nests on the sides of barns or buildings, under the eaves, much like barn swallows do.

Cliff swallows lay 3-6 small light pink eggs and both parents incubate them. About 2 weeks later, the eggs hatch. Both parents feed the chicks and about 3 weeks after hatching, the fledglings leave the nest.

This bird is very widespread in the US, Canada, and Mexico, though it doesn’t occur in the extreme southeast US. It breeds over the western part of its range, as far south as southern Mexico and as far north as Alaska and some parts of northwestern Canada.

The population of cliff swallows is increasing, partly because of the already mentioned bridges. It is especially plentiful where there are vertical cliff faces near water, but the bird is found in valleys, mountains, open land, deserts, meadows, fields, and prairies. It is also found in forests, as long as the forest isn’t too dense so the birds have plenty of room to fly around.

These are pretty little birds and they do quite a number on insects.