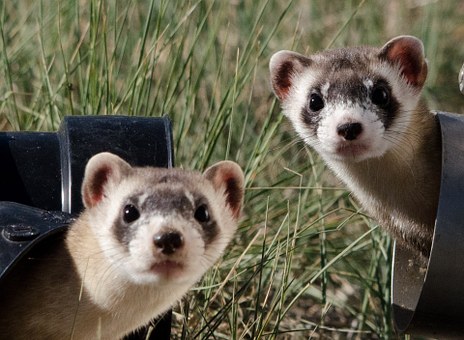 Another favorite animal of mine is the ferret.  They remind me of long, flexible tubes.  They are in the same genus as weasels and are a domesticated form of European polecat.  The average length is 20 inches, including the tail; and they weigh approximately 1.5-4 pounds.  They have a lifespan of 7-10 years.  Ferrets are brown, black, white or mixed colors.

They  have been domesticated for at least 2,500 years and are still used in some parts of the world for hunting rabbits…but mostly they are kept as pets.  They sleep 14-18 hours per day and are most active from dawn to dusk.  The name ferret comes from the Latin furittus which means “little thief” because ferrets like to steal small items and hide them away.

Ferrets are obligate carnivores; and in the wild they eat small prey including the bones, fur and organs. As a pet they can be fed a high-grade cat food; but ferret food is now available and preferred.  Some owners will feed their ferrets mice and rabbits.

If you are thinking of having a ferret as a pet, be sure to check your state and local ordinances.  Some states in the United States and Puerto Rico prohibit the ownership of ferrets; some areas require permits.  There are also regulations in place in some foreign countries.