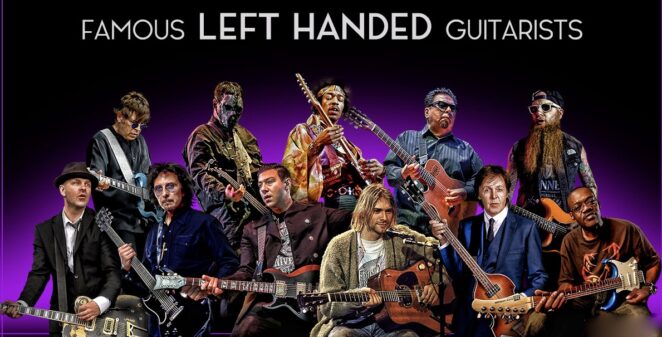 Starting  a new three part series. Famous left handed guitarists. Yes I am bored but trying to find something different to share. I hope someone out there is interested. From my research I have found 19 guitarists who are left handed. I will break the series up into three parts.

If you don’t know who this guy is then you should do some research. Never mind famous left handed guitarists, he is arguably the most celebrated and influential guitarist of all time! Jimi Hendrix is best known for wielding Fender Stratocasters.

Black Sabbath‘s Tony Iommi is widely regarded as being the pioneer of heavy metal and is undeniably one of the biggest names in rock guitar. Tony Iommi lost two of his fret-hand fingertips in a workplace accident but carried on playing left handed with prosthetic replacements! Best known for playing Gibson SGs.

Kurt Cobain founded Nirvana, the band that defined the grunge movement in the 90s. Nirvana became one of the biggest names in music and to date has sold over 75 million albums worldwide. Cobain was generally best known for playing Fender Mustangs and Jaguars. Fender has recently released signature Cobain Jaguars and Mustangs, all of which are available left handed.

Two words – The Beatles. As a member of the Beatles and also as a very successful solo artist, Paul McCartney has sold over 100 million albums worldwide. After his almost infinite contributions to the world of music he was awarded a Knighthood in 1997. Paul is probably most widely known for playing his Hofner 500/1 violin bass.

Elliot Easton is the lead guitarist in American rock band The Cars.  Easton is probably best known for his Pelham Blue ‘Inspired By’ Gibson SG model, but he has also more recently introduced his signature Gibson Firebird guitar. Aside from his signature Gibsons, he also owns one of the most impressive lefty guitar collections you are ever likely to see!

Zacky Vengeance is the rhythm guitarist in American heavy metal group Avenged Sevenfold, who to date have sold over 8 million records worldwide. Zacky is endorsed by Schecter and has had several signature models over the years, all of which have been available as a southpaw version.