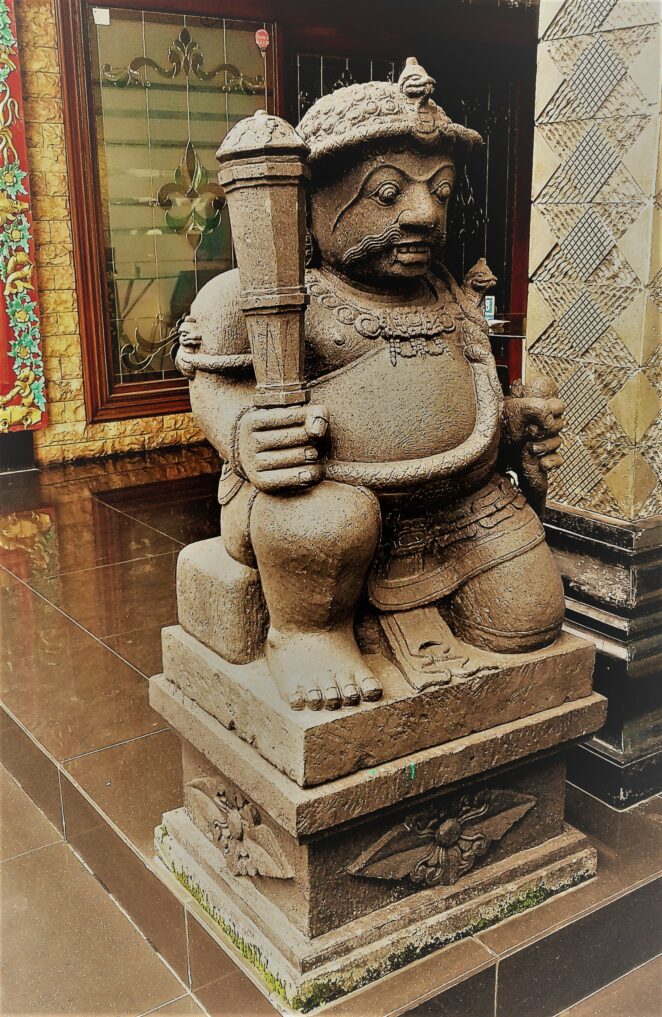 I took this picture last year in a restaurant. This statue is a statue of Dwarapala which is a statue of a gatekeeper or door in the teachings of Shiva and Buddha. Usually, Dwarapala is placed outside the temple, temple or other building to protect the sacred place or sacred place inside. Dwarapala is usually described as a scary creature. Depending on the prosperity of a temple, the number of Dwarapala statues can be alone, in pairs, or in groups.

The largest Dwarapala on Java is in Singosari, made of 3.7 meters high intact andesite. On the islands of Java and Bali, the Dwarapala statue is usually carved out of andesite stone, has a fat stature, and is depicted in a half-kneeling position, holding a mace. While Dwarapala in Cambodia and Thailand have a slimmer body stature with an upright body position holding a mace in the middle right between his legs. The Dwarapala statue in Thailand is made from clay pottery coated with pale milk glazing. Statues like this were made during the Sukhothai and Ayutthaya kingdoms (14th to 15th centuries) produced by several kiln pots in northern Thailand.

In Javanese culture, Dwarapala is used as a guardian figure of the palace, for example, it can be found at the entrance gate of the Yogyakarta Palace and Kamandungan Lor  (north; Javanese) gate Surakarta Palace.

The initial idea of posting this picture is actually to talk about who our guardians are as human beings and how to get close to them and utilize them for our success in life, but I doubt if you are bored with that kind of topic.