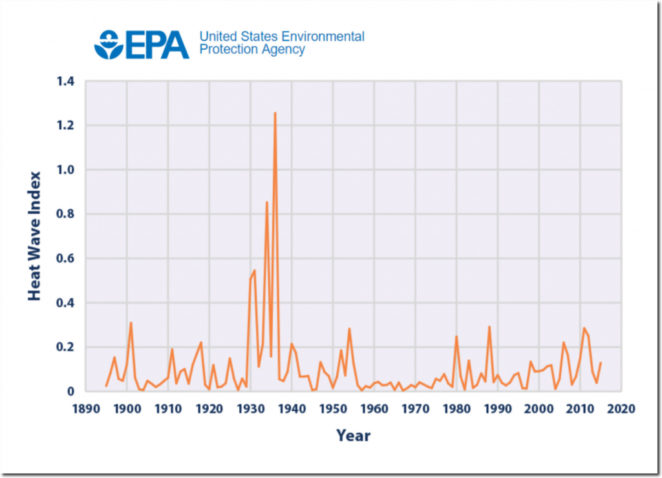 One of the things about real data is that the actual numbers don’t have an agenda and aren’t swayed by research money. Of course, there are always people who will try to alter the data to try to make it seem like the data is saying something it absolutely isn’t saying. They often use words like ‘adjustments’ to try to justify their manipulation of the data but that is transparent since the data doesn’t need and shouldn’t be adjusted.

That is extremely true when it comes to climate. NOAA is responsible for compiling and recording weather data. More specifically, if anyone questions this, here is a statement from the NOAA website:

NOAA’s National Centers for Environmental Information (NCEI) is responsible for preserving, monitoring, assessing, and providing public access to the Nation’s treasure of climate and historical weather data and information.

There is a lot of data there. Weather records have been kept in the US since the late 1800s and 70-80% of the weather data that is recorded and used around the world actually comes through NOAA and NSA (National Science Administration).

Imagine the eyebrows that were raised when NOAA, NCEI, and NSA were caught more than once fabricating data. Some of the data were simply changed, but in other instances, data was recorded that couldn’t have been recorded because there were no weather stations in those particular locations at the time the weather was recorded by NOAA. In any event, weather readings are a matter of history and, as such, aren’t subject to someone changing the information. Doing so is an obvious attempt to rewrite a facet of history.

That is why a graph like this one is particularly fascinating to me. The information comes from a report issued by the Environmental Protection Agency of the US Government, using the actual recorded temperatures. It is also fascinating that this report was for the topic of climate change and the EPA has been among the agencies supporting the various global warming theories (there are several, not just one).

This is the heat index in the US, using data from all functioning stations and climate data centers. This covers a period from about 1895 to almost the present. Notice especially the spike that occurred in most of the 1930s. The ‘anthropomorphic global warming’ craze began in the late 1990s. Yet, the temperatures have been going up and down year after year throughout this period roughly 110 years covered by the graph. That isn’t surprising since weather, by its very nature, can’t be static. The weather we’ve been experiencing for the last few decades doesn’t come close to the huge spike that happened in the 1930s, in severity.

It really doesn’t go beyond being interesting at this point, though, simply because even climate ‘experts’ don’t honestly know what it means. We barely have an understanding of the climate and have no idea of how all of the variables work together to form the climate. For that matter, it is doubtful that we know what all the variables are. Additionally, this graph only shows high temperatures, not cold temperatures.