One of the problems of being a long-term farang in Thailand is that you contribute to the social ills of the country – by investing unwisely, by being forever drunk, by shouting, by waiing when you should keep your hands down at your sides. By having accidents which are your fault (because you are in Thailand – Siam logic). That sort of thing.

Maybe Alice (now one and a half) came along because of me. I kept Alice’s grandma in Pattaya while grandma’s daughter languished in darkest Isaan. Bad food, bad relationship with school, no real role-model, tough, remarried dad, drunken, neglectful brother. So one of the first things that this daughter did in Pattaya was to have a child – no marriage, no work, no father. That sort of thing. Abandoned in the Isaan, she took it up with mum (and me) here in Pattaya. 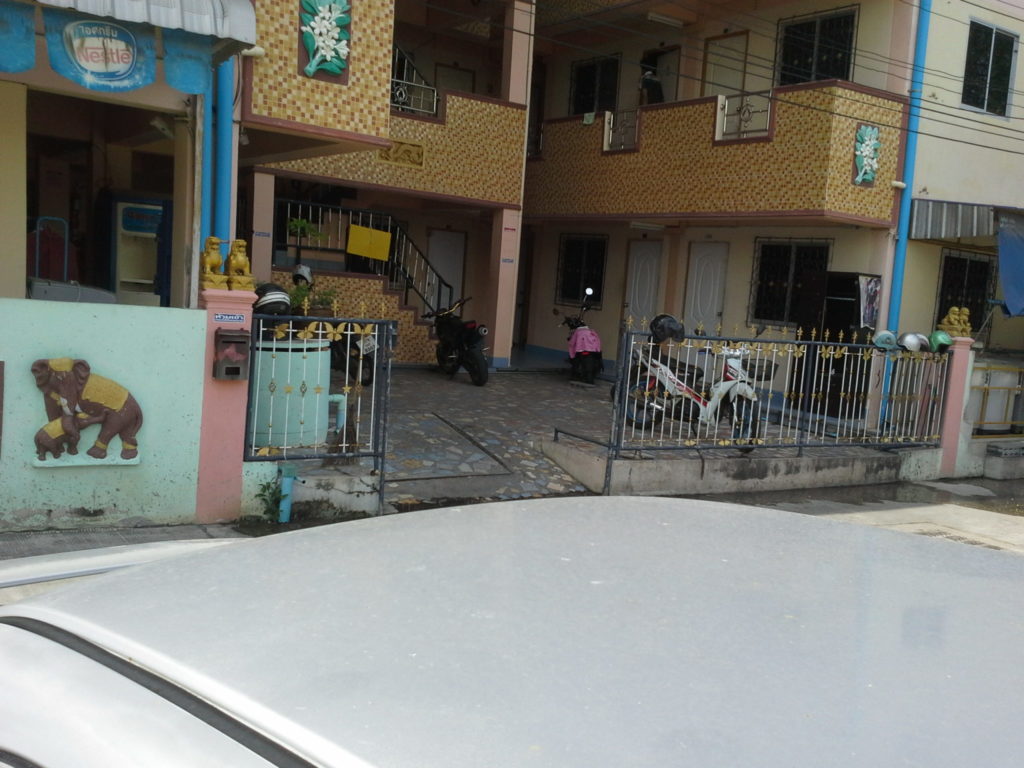 Yesterday, I went to see said daughter (Oy) and her child (Alice) in their new quarters. Quarrels with mum, me stopping lots of friends dossing, her own sense of isolation, had meant Oy choosing lodgings two kilometres away. Surrounded by teenage friends, in a one-room apartment (2,000 baht a month!), on the dark side of Pattaya, I found her. The first-floor room was bedraggled and the railings outside her room just high enough for the moment to stop two-year-old babies climbing up and falling over. There were two long and handsome Thai youths running errands for Oy. I whispered to Oy that she should never ever leave Alice alone in closed rooms with anyone. I whispered that the railings will be surmountable when Alice is two-and-a-half or three. I whispered that Oy needs to medicate her own lips. There were lots of other things I could have whispered but didn’t. Today, I have an appointment with Oy and Alice. Down we drive to the supermarket. I’m going to suggest strongly that Oy and lovely daughter return to our three-bedroom, detached house. Cos in a semi-demi-second Alice’s life can be ruined. (Yes, I agree, it can be ruined in our three-bedroom detached house, too. Woe is me.) 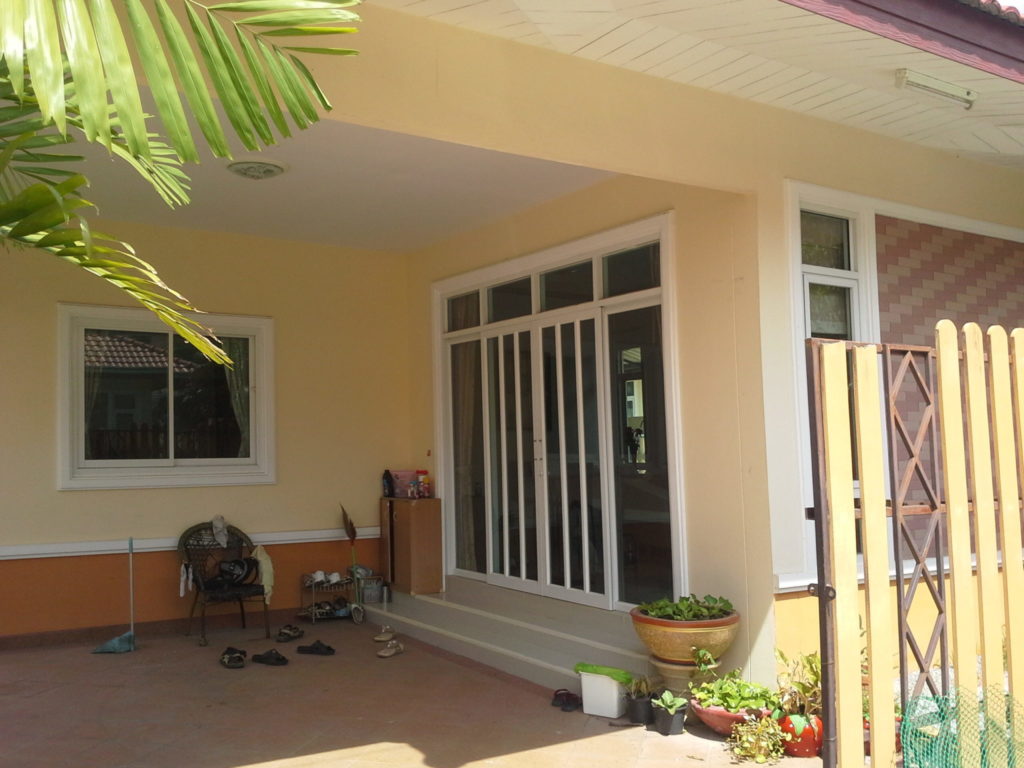 I’d had other problems, too. A good friend had been dragged, Roman-chariot-style, behind a speeding-up car and had crunched off his motorbike and ended up in a pitty channel on the railway-road that separates dark-side Pattaya from light-side Pattaya. The rope pulling broken-down bike had been attached, not unattached, to said bike so he hadn’t been able to unattach the rope when he’d lost his balance. We’d done some good stuff and got the bike to a pithless mechanic. I’d ired on the Sukhumvit with babbling curses. (Sukhumvit Road, you torrid, blood-thirsty monster! you who eat victims every day, nourishing yourself on the dead brains of hapless thousands!) 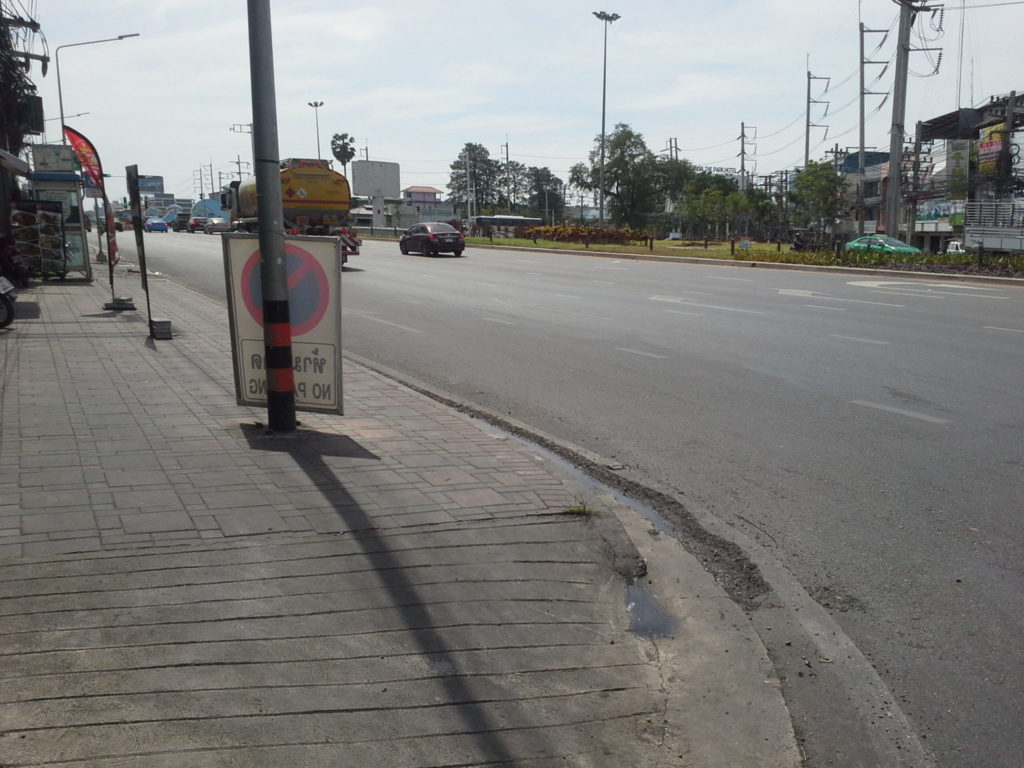 You see, I’d got stuck in the third lane of 5-and-6 lane Sukhumvit and I’d cussed because Sukhumvit Road is as dangerous as a cyclops and to be stuck near its middle is asking for trouble. I’d moved out and hooted, and got my injured friend back to his one-room lodgings. I was stressed. “I need a swim,” I said to myself. I jumped in the car and headed to my condo complex near the centre where there is a crappy but filled swimming pool. I got on to the SUKHUMVIT ROAD for the fifth, sixth or seventh time that day. Near a U-turn for my condo, in the fourth lane I had to stop. Six o’clock in the evening. Tiredness. Irritation. The end of many people’s day of work. I saw the U-turn just near and the fifth lane seemed free. Making for it………out of the corner of my eye I glimpsed a painted monster rushing down on me. A huge painted Thai coach had exited the new underpass and was at me at 100 kilometres an hour, coming through on that outside lane. I applied brakes immediately and crouched, shutting my eyes, moaning briefly. It thundered through throwing up stones, dust, and particles from angry, seething Sukhumvit as the brakes were released. I didn’t make the U-turn. I followed that assassin coach and saw it slow immediately and veer to the left to stop at traffic lights near Pattaya Big C south. I did swim.

Today, I’m going to pray to Alice’s mum after buying twenty cartons of teeny milk for Alice, a lovely Thai baby whose life can be ruined in a demi-second……I’m going to pray that just for a temporary bit Oy and Alice come “home” – just for another year or two. Please. If I start to cry, maybe she’ll be impressed because there’s a lot to cry about, really.