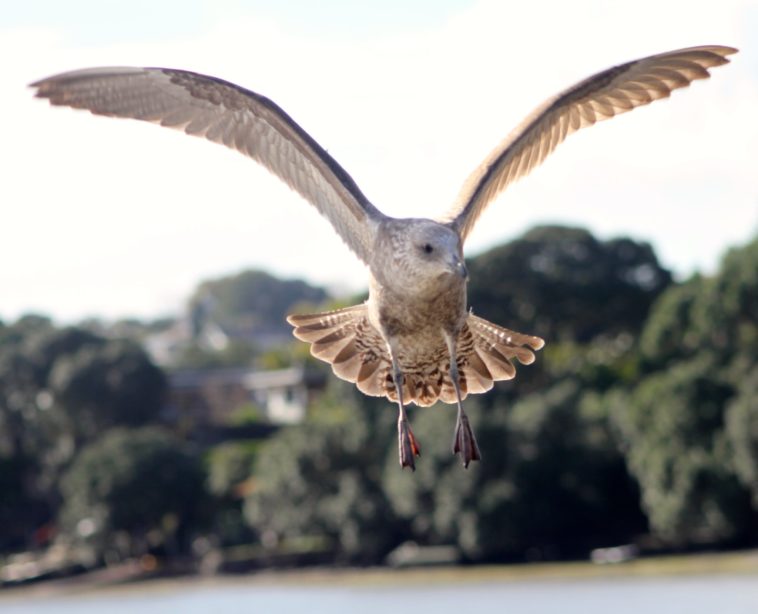 Now a new tunnel has opened for traffic in Auckland, it goes from Owairaka to Point Chevalier and the tunnel is long 2.4 kilometres. It shortens the trip and makes less congestion of traffic in Auckland’s North West South motorway. It really has made a difference for the good.

I wanted to explore natural life of this area, from Point Chevalier to Westmere, which is close to the Auckland Harbour Bridge, and this includes Waitamata Harbour.

Your first picture here is looking at part of this new motorway with the usual Western Motorway behind it which has been there for 50 years or much more.

This is part of the Spagetti junction all roads to where ever people want to drive their cars. Plus a very beautiful walk way has been created as well as the motorway extension. Many native New Zealand plants have been recently planted to keep this environment natural, it’s quite beautiful.

These are 3 Punga trees on the side. I like them because they are a very important part of New Zealand scenery. There are NZ grasses and other things that are grown here. The foot path goes to other parks.

Scenery with some more light and more variety. You need a reasonable level of fitness here and good footwear as you go up a hill on this path.

Now this is looking onto the North Western motorway over the mangroves and scrub. It harbours a lot of natural life, a world beneath the foliage of plant, marine life and bird life and much unseen but life is there.

This is a bridge to a beach not visited by strangers, but locals or people who walk in unfamiliar grounds like me. It goes over a little stream.

This is the beach front with the tide out. There’s a nice walk way here.

Point Chevalier beach is not far away but the day we visited the grass was very muddy and the tide was out. Photos are best taken on a sunnier day with people about. It has swings and slides for children and when the tide is in, it’s safe for children to swim here with parental supervision.

This little bay is off Garnet Road and the shops are up the hill. There were plenty of sea gulls that day begging for bread from children. It looks over to the North shore. As you can see you can park at the bottom of the hill.

This is one of the locals, a Juvenile Black Backed Gull after bread from the children. Then we move on.

A White Faced Grey Heron takes off and goes West!

This is a scene from a road in Westmere that over looks Coxs Bay in the Waitamata Harbour it is further East from Point Chevalier. You walk down a path that is down hill that lasts 10 minutes and you walk behind 2 beach front buildings to a path leading to an off ramp park and then you can cross the road to a park. It’s a very steep climb uphill. You need a reasonable level of fitness to do this part. The homes here are well over one million dollars NZ even two million or up, because of the premium location and the views. However, if you want to live by a cliff – you take the consequences when the rain is extremely heavy and slips plus losing your house, is a possibility…

That is the path down to the bay I just described. It’s very pretty.

Here is one of the homes. The whole street is of beautiful homes. A lovely looking place to live in but only for the wealthy few.  However, going through the walk ways is free of charge.

This is a house with rooms with a view! The price of living here with rates is very high maintenance but it’s not a bother to people that are earning lots of money. One day, I will show you the other side of life of Auckland just so that you know that we are not all millionaires, certainly not me, but there are some who are far worse off than me.

This house is old money in New Zealand, it’s probably at least over 60 years old and probably inherited from generation to generation. It once wasn’t worth a lot until modern times.

The above picture is another part of Westmere, closer to the Auckland Harbour Bridge. On this day I met an old man in a wet suit coming up the path. It’s the middle of winter so you would need to wear a wet suit. He told me that the couple below had caught a Kawhai fish that day.

The view of Auckland City Harbour Bridge here from the wharf.

This is owned by 2 percent of New Zealand’s wealthiest people and they have prime position. Actually, Im not envious at all. They have to have 6 eyes in their head on a 24 hour basis, for there are plenty who will take their chances to get their share. On the same token I wouldn’t want to walk around wearing the most expensive jewellery either.

This is looking up the walkway from the Wharf. It’s a very easy walk. The scenery is very pretty and there are great views all around. This is the end of the road. I took these photos over four days and for this part, a tourist in my own country!