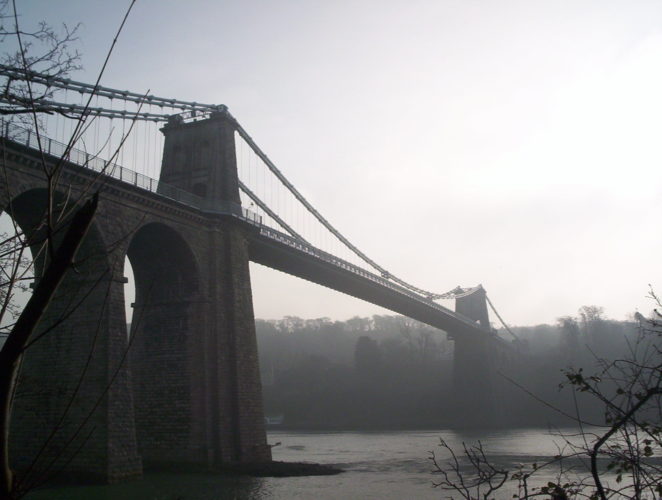 I was a student at UCNW (now Bangor University) in the early 1970s. On Sunday mornings I regularly took a stroll down to the Menai Straits and walked across the famous Menai Bridge and back. Sometimes the bridge and the Straits were shrouded in mist, just as in these photos that were taken much more recently, although the scene is exactly the same.

The Menai Bridge was completed in 1826 to a design by Thomas Telford, and was the World’s first major suspension bridge. It carried an important roadway across the Strait, because this was the route that led to the port of Holyhead on Anglesey, from which ships departed for Ireland, as they still do. The Strait was also used by shipping, and the road had to be high enough to allow their masts to pass underneath.

The two narrow roadways were fine for the horse-drawn transport of Telford’s day, but not for modern traffic. At about the time I was a student at Bangor, the railway bridge a mile or so further down the Strait was adapted to carry road traffic as well, and this is now the preferred route. However, you can still use Telford’s bridge should you wish to.

My walks were usually in the company of my girlfriend of the time. A romantic setting? I would have said so!