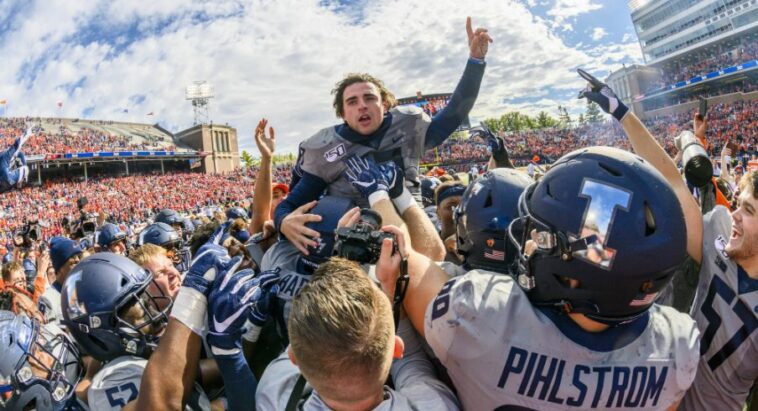 This image will always be ingrained in my memory! It is a picture of the Illinois Fighting Illini football players hoisting kicker James McCourt up after his 39-yard field goal attempt as the time expired. The Fighting Illini defeated the Wisconsin Badgers 24-23. At the time I was leaving Detroit Metropolitan Airport, headed to my hotel during Detroit Free Press Marathon weekend, but well tuned in via YouTube. With doubt in my head because of my lackluster marathon training for the 26.2 mile run, I said to myself “My boys did it! And now it is time for me to handle my business and complete my 20th marathon”, which I did.

As an avid fan, I cannot look at this image without getting teary eyed because it gave me hope that the Fighting Illini program is headed in a new direction. It also made me feel part of a winning team because the Fighting Illini football team is not always on the winning side, if you know what I mean. I see unity! The unity of this underdog team that just did the unthinkable by defeating Wisconsin, who were at the time the 30-point favorites going into this game. Go Fighting Illini!