Just ran and finished my 19th overall marathon, which just happened to be the Chicago Marathon. Out of all the marathons that I have ran, this was by far one of the wildest! It was wild, because I did not train for it, due to having so many personal things going on in my life, such as school; finding a job, and stress of not knowing if I would even be able to find a second job to pay my bills. I had up and down emotions, but a month out prior to the marathon; I told myself that I was not going to run it, because my focus was just not on the training. That voice in my head told me to do at least something, whether it was the elliptical or indoor riding, because anything indoor would allow me to get some study time in as well. I kept at it until I landed a job at the end of September, which was a huge relief. By then the race was a little over a week away and luckily indoor and outdoor cycling kept me in decent enough shape, I vowed to run the marathon, but vowed to take it easy and not get too reckless. 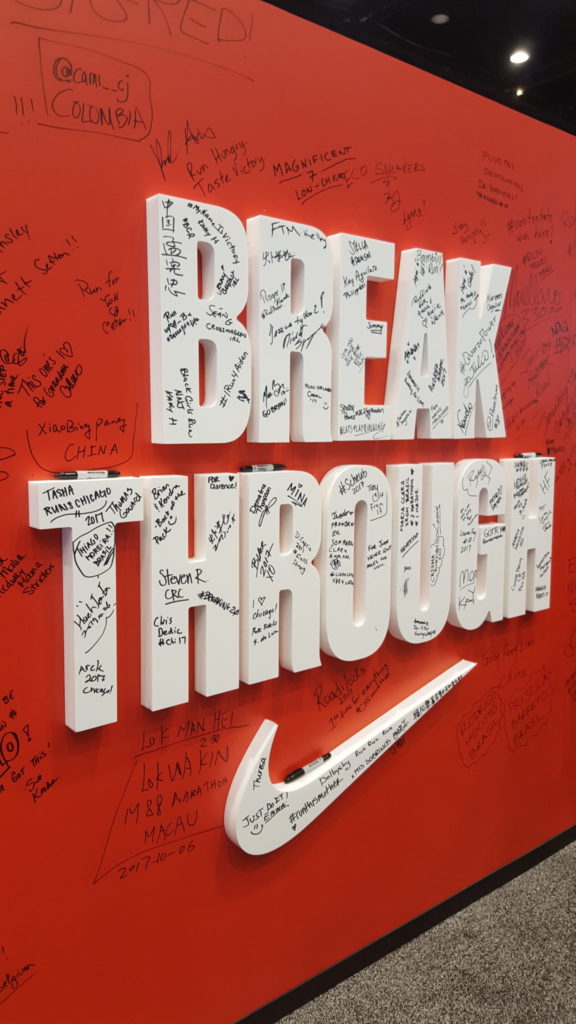 With cycling, I like to use the ratio of every three miles equals to one mile of running; however, the only difference is that you do not have the ground impact. That Sunday, with a week out from the marathon, I made it my priority to log in at least a ten-mile run, but my goal was to spread the time out, and stay on my feet for at least three hours to get my legs ready for a long few hours of pounding on my feet at the marathon. That is a tip for you also! “Run by time, not by distance.” Train to stay on your feet for hours versus running a certain distance prior to a marathon, or whatever distance you choose to run. 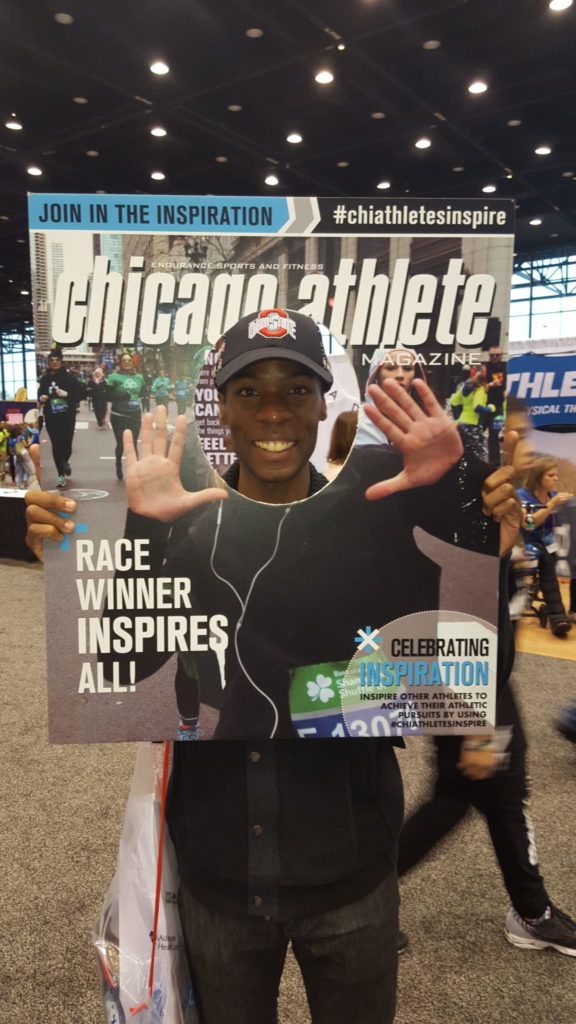 The night prior to the marathon, I carb loaded with pizza from 7-Eleven, and it was very good! It was also cheap, compared to eating pizza from Papa Johns, Dominoes, or Pizza Hut. Best believe that I will be doing that once again for future marathons,because pizza is pizza. No matter where you get the pizza from, it is still carbs needed for the distance. 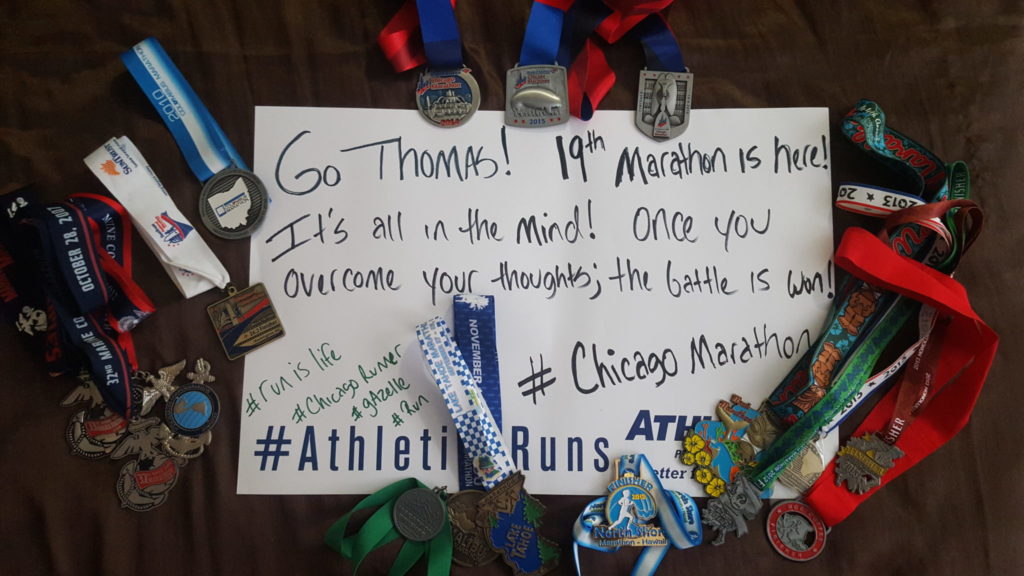 The day of the marathon, I had my plan all figured out. I figured that I could not fail, if I hit at least every two water stops on the course, because it will keep my body hydrated, and prevent cramps! I will just go out with the mindset of that its a training run, because if I go for time, I will drain myself out, and cramp! Prior to leaving out the door, I made sure to put kt-tape on my hamstrings, and calf muscles, because it takes some of the stress off those muscles worked. If you have not ever used kt-tape, yes; it is awesome and it works! Everything went well prior to making it to the starting line, but the only thing I did not do was make it to my corral on time, which was not a bad thing, because running with slower runners will prevent me from having that mindset of going all out! 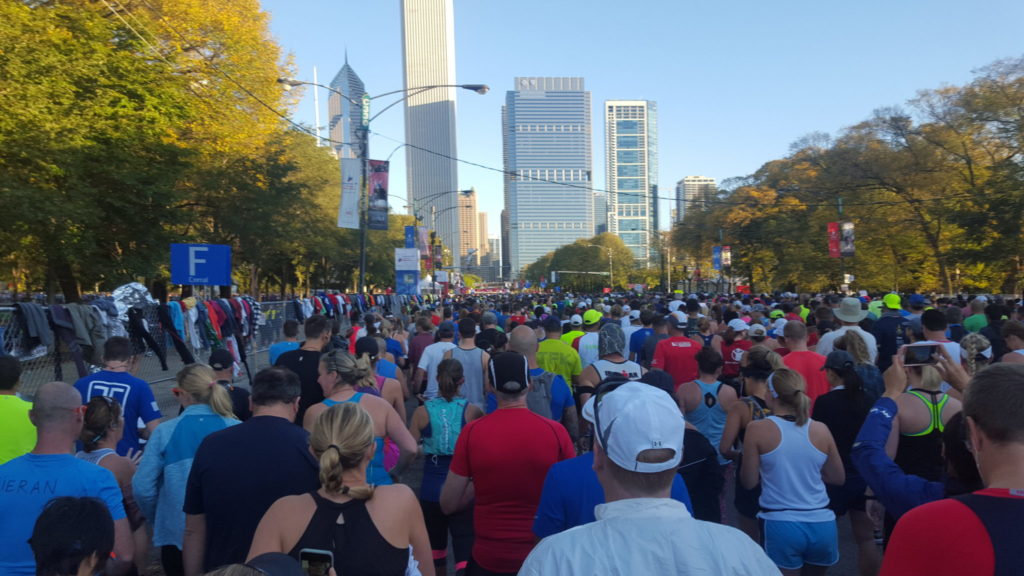 Making it to a corral; even though it was not my corral was a huge relief, because the only thing that stood in my way now, was 26.2 miles, and yes, I was ready! You do not have to be ready physically, if you are ready mentally. “All you need is the mindset that you will finish, and the battle is won”. “If you go out with the mindset that you will not finish, then you most likely will not!” Running is like a mind game, and if you fall prey to the voices telling you to stop in your head, then you will not finish. Distinguishing what pain triggers are temporary, and what pain triggers are serious enough for you to stop or throwing the towel are factors also. The thing that I loved about this marathon was that I literally took it mile by mile; enjoying majority of the signs of supporters along the course; took breaks when I needed them, and got the chance to thank a good chunk of the volunteers and supporters along the 26.2 mile course of Chicago Marathon. The signs that supporters hold are supportive, and some will have you smiling or laughing along the course. You even have the supporters that hand out snacks along the course to give you that sugar boosting route to the finish.

You do not have to win, because finishing is winning! Finishing this marathon was a huge relief, because I thought about everything that I went through leading up to it, which made it a very emotional finish, once I crossed that finish line and made my way down that long stretch in the finish line area. I walked with a limp, after finishing, because my toenail suffered during this run and currently to this day, it is black! This is black toenail, and it resulted from my toenail banging against the tip of my shoe for 26.2 miles straight. Like a warrior with scars from the battle, I have a black toenail that will soon fall off!

Even though this was my 19th marathon, it felt no different from the others. The only difference compared to my very first marathon, is that I have more knowledge, and know when my body is telling me that it needs a break. I listen now, compared to my very first marathon, which all comes with time. Running such a distance, you must replenish your body or your body will fail. For those considering running a marathon, just remember that finishing is winning! Do not be ashamed of a run time, because you will eventually forget about that runtime, and move on to the next. Just enjoy the moment, and make memories!