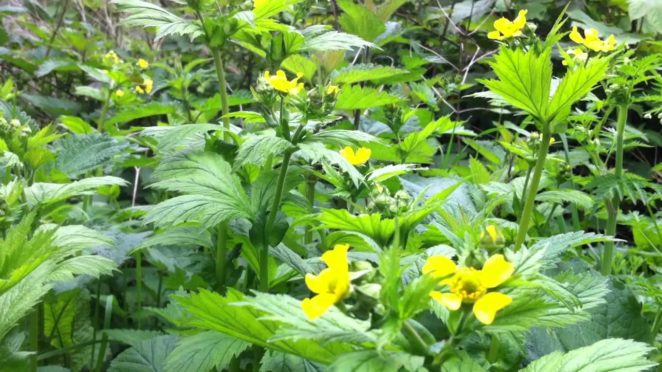 Wood avens (Geum urbanum) is found throughout the British Isles in shady places with damp, fertile soil. It is an upright, hairy plant that grows to a height of between 12 and 24 inches (30-60 cms).

Some leaves grow on stalks rising directly from the base, each bearing two or three pairs of leaflets of unequal size. The upper leaves that grow from the stem of the plant have three lobes.

The yellow flowers, which appear from June to August, are upright with turned-back sepals and spreading petals. The seeds are hooked and spread by being caught in the fur and feathers of passing animals and birds, as well as the clothing of human passers-by.

Wood avens has a remarkable mythology attached to it. It was thought to have an association with St Benedict, who founded the Benedictine order of monks. An alternative name is herb bennet.

This belief gave rise to notions that the plant had mystical or magical powers. A medical treatise of 1491 stated that “if a man carries the root around with him, no venomous beast can touch him”. It was also thought that hanging wood avens over one’s doorway would prevent the Devil from crossing the threshold!

Apart from these remarkable supposed powers, the roots of wood avens, which have a delicate clove-like smell, have been used as a fly repellent and for flavouring ale.