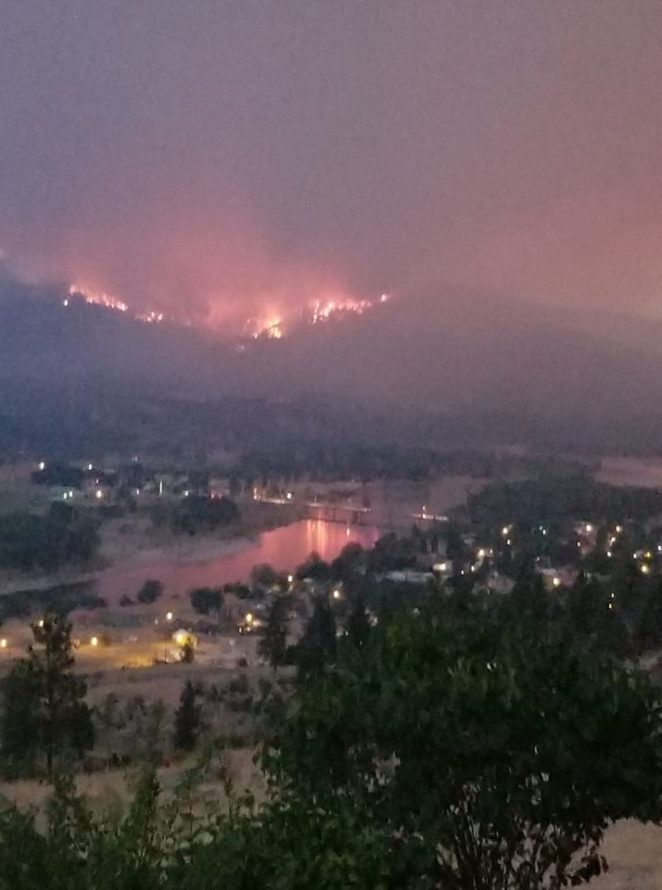 The devastation of hurricanes, floods, tornadoes, earthquakes, and mudslides can happen nearly anywhere and they usually get a lot of media coverage. The also get substantial amounts of money and aid to repair the damage that is done. However, in the Northwest part of the US particularly, the top natural disaster that occurs with yearly frequency is none of these. The biggest natural disaster in the Northwest is forest fire.

Forest fires destroy trees, animals, habitats, and often homes and sometimes businesses. They seldom get the sort of media coverage that a hurricane or large flood gets and they don’t get nearly as much in disaster relief. Yet it takes a great deal of time to recover fully from a major forest fire and it is tremendously costly. It takes roughly 45 years for a fir forest to proceed from seedlings to a mature forest, assuming that trees can be planted.

The following images are related to just one of over 30 major forest fires and several thousand smaller fires that burned just in one state, Montana, in 2017. Thousands of acres of forest were destroyed in just this one fire. Countless animals were lost. When it was burning, over 100 families were evacuated, along with their pets and animals. The devastation was tremendous largely because of lack of funding for fire suppression. It was through the efforts of dedicated people that not one house or other structure was lost during the fire.

The name of the fire was the Sheep Gap Fire Complex and it was a number of fires that were lightning caused.

This is a view of a section of the fire as viewed from above our little town and the valley. Although obscured by smoke, some of the flames in this picture reach 150 feet off the ground as large, formerly healthy fir trees and pine trees burst into flames like candles. Individual trees were being entirely engulfed in flame within two or three seconds.

The view is facing west and the distance from the fire to the town is about 3 miles in this image. What isn't as apparent is that the fire actually extends out of the frame both to the right (to the north) and to the left (to the south). In fact, this was just a 'tongue' of the fire.

My home is located just out of the frame in the right center of this image. 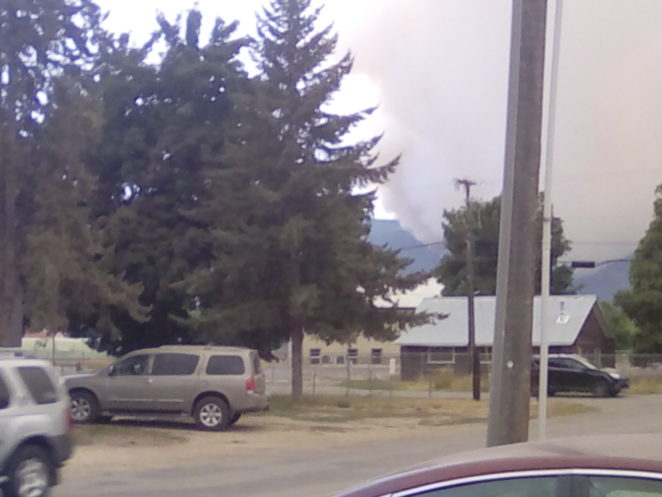 I took this image from the parking lot of the Assembly of God church. Although there are trees, a power pole, and the old grade school is in the way, the size of the plume of smoke is quite noticeable. This picture was taken was taken about five hours before the last image was taken.

It doesn't show up well, but the smoke was filling the air as I took the picture, but this was the clearest day we'd had in about a week. There was a very slight wind blowing to the north in town. There was no wind at the fire, thankfully, which is why the smoke is going straight up.

People were still having difficulties breathing, regardless of how healthy they were. 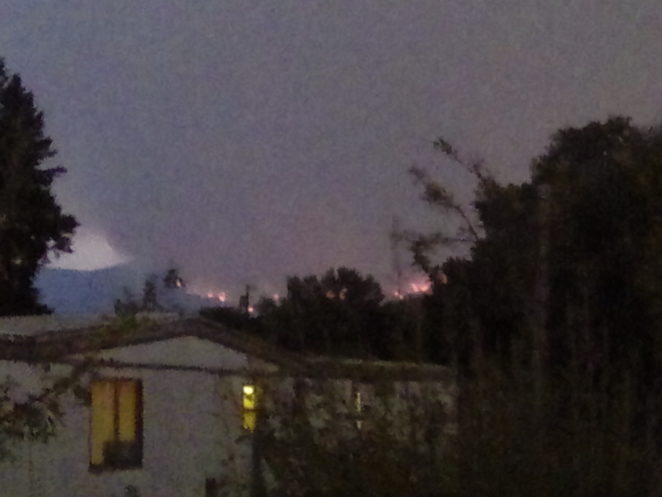 This picture was taken about a half hour before the first picture was taken. It is from the corner of our backyard looking west. Even with the trees in the way in the foreground, the trees on the hillside that are bursting into flame are evident.

This was a cause of many spot fires and a contributing factor to this being a complex of fires rather than a single fire. No structures in town burned, thanks to the vigilance of the community. 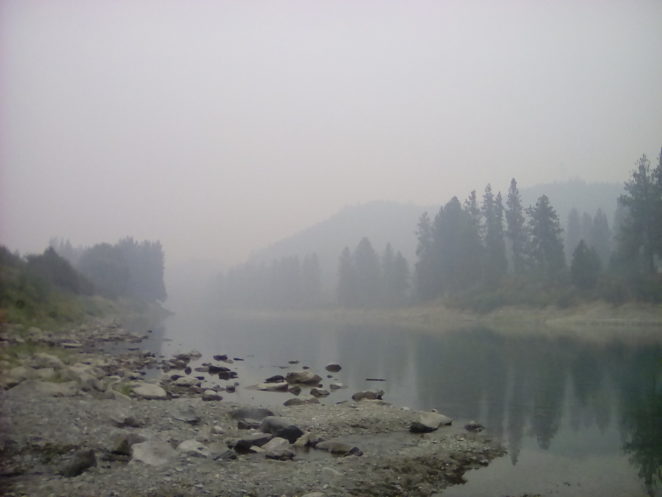 The camera showed this to be only slightly smokey, but the smoke is actually dense enough that my eyes were burning and I was coughing as I took it. The view is to the southeast. The distance to the nearest part of the fire was about five miles and this picture was taken at the shore of the Clark Fork River. The distance from here to town is about 15 miles.

What is astonishing is that the slight wind is actually blowing upstream, from my back toward the fire. This means that it was actually blowing the smoke away from this spot. It doesn't take much imagination to figure out how dense the smoke would be without that small breeze. 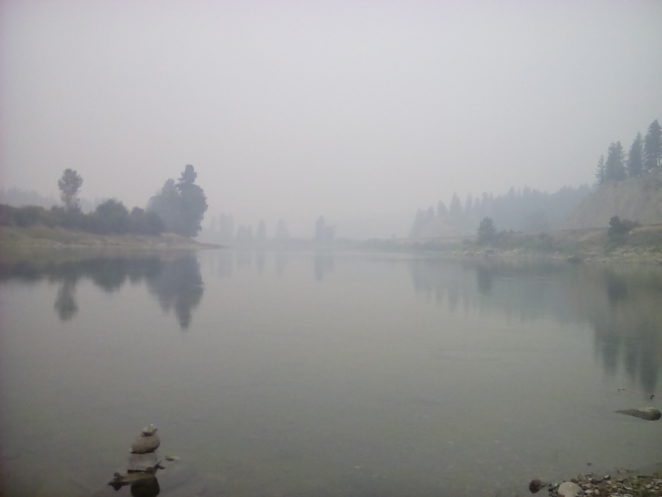 From a slightly different spot, this gives a better view of how dense the smoke really is. It looks like the river is flowing through relatively flat land. In actuality, the smoke is hiding the mountains that rise to either side of the river in the distance. The terrain is clearly shown in the first picture, although this is about 15 miles away. Still, the distance from where I'm standing to take this picture to the nearest of those mountains that can't be seen in this image is less than a mile.

That is dense smoke! 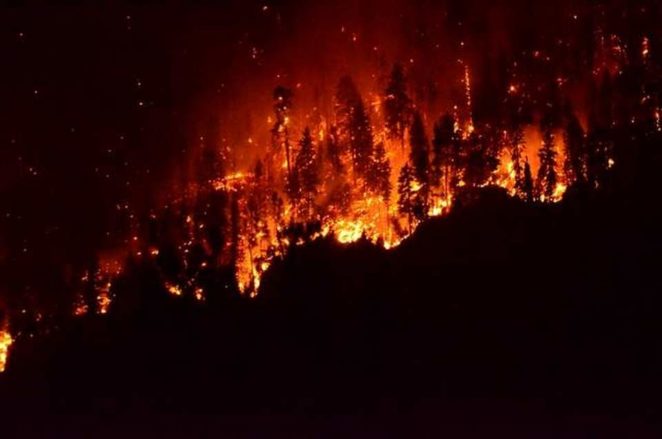 This image and the next one was taken by and published By ERIN JUSSEAUME Clark Fork Valley Press, our local newspaper, which is run by our local high school. This is a much closer view of the fire as it burned. It shows the roughness of the terrain and the trees crowning. Floating embers from the fire are also shown in the image. 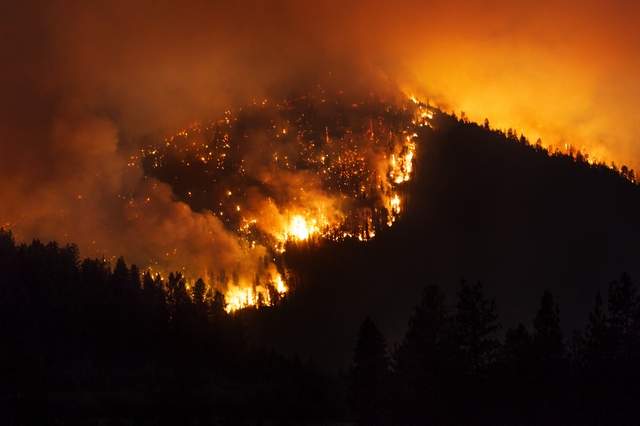 In this image by ERIN JUSSEAUME Clark Fork Valley Press, the fire has moved over and engulfed the top of a ridge. It is moving in a line down the other side of that ridge. It doesn't show up, but there are homes at the base of that ridge, next to the river. It is truly amazing that through the immense personal effort of the firefighters, not one home was destroyed. You can imagine how difficult it was to prevent houses from being destroyed.

Sadly, this ridge was formerly the home of a large population of mule deer, elk, bighorns, cougars, lynxes, and a huge number of squirrels, hares, owls, hawks, and many more animals. Many more deer used it as wintering grounds.