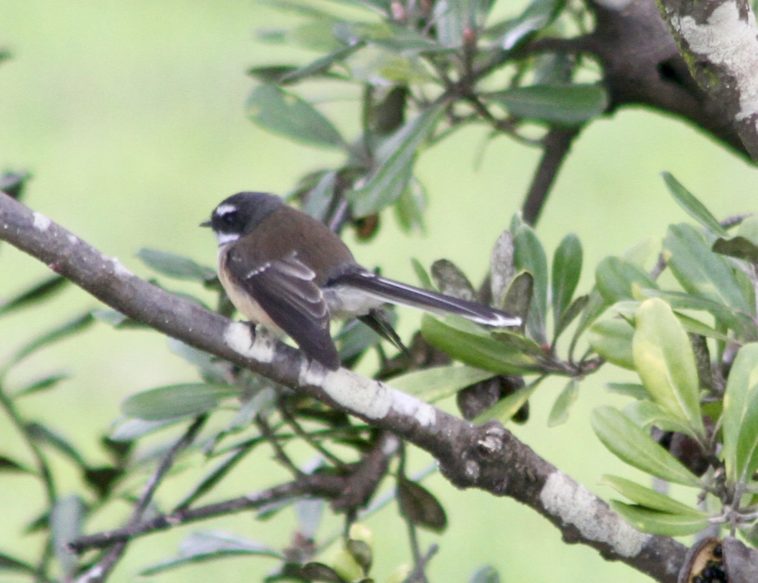 With photographing New Zealand Fantail, sometimes you just get lucky. Here at Long Bay on Auckland’s North Shore, I spotted one of these in a bush and followed it around.

It’s not a threatened bird but it’s very special when you see one. These birds have a sweet personality. The Maoris call it, “Piwakawaka”.

Most people living in Zealand encounter a fantail occasionally. Especially when they fly within 2 metres of you. The New Zealand Fantail comes in 2 colours, Black or Pied. The adult fantail comes with a greyish head, white eyebrows, brown back and rump, cinnamon breast and belly, white and black bands across the upper breast,  a long black and white tail. Juvenile pied fantails are mainly brown tones over the head and body, lacking the strongly white eyebrows and chest bands, and are more rufus on the breast, eyebrows and on the tips of the primary coverts than adults.

So here you see the Pied Fantail.

This little bird has a unique way of flying which is very fast, it sometimes uses it’s tail feathers as a fan and sometimes not. Quite often it hovers in the air, not far from your face looking at you. I suspect they seek air borne insects which we can’t see.

The Fantail eats small insects, moths, beetles, and spiders. Large prey is subdued by being held by a foot on a perch and regularly pecked. Sometimes they eat small fruit.

During the breeding season, fantails are very territorial chasing away interlopers with harsh chattering calls. While the adults remain on or near their territories in the non breeding seasons, juveniles will band together in loose flocks where prey is readily available. During fine warm weather, fantails forage from the under storey to the canopy, and even above the canopy. They can be found with flocks of other species, such as brown creepers, white heads and silvereyes, perching below ready to intercept any prey that falls. The timing of breeding can be subject to weather and conditions.

When seeking prey Fantails often flick their wings and fan their tails to get their prey to move so they can be detected.

During cold spells in winter they can be seen moving along the ground moving in search of food. Given their small size and vulnerability it’s not surprising they roost communally, perched together in a sheltered cavity inside sheds or garages.

Fantails have coped well with the conversion of forest to farmland. However when they are nesting the breeding adults and chicks are not immune to being preyed on by mammalian pests such as ship rats.

The fantail can be extremely vocal except in cold conditions. They regularly give cheeps, particularly in the breeding season.