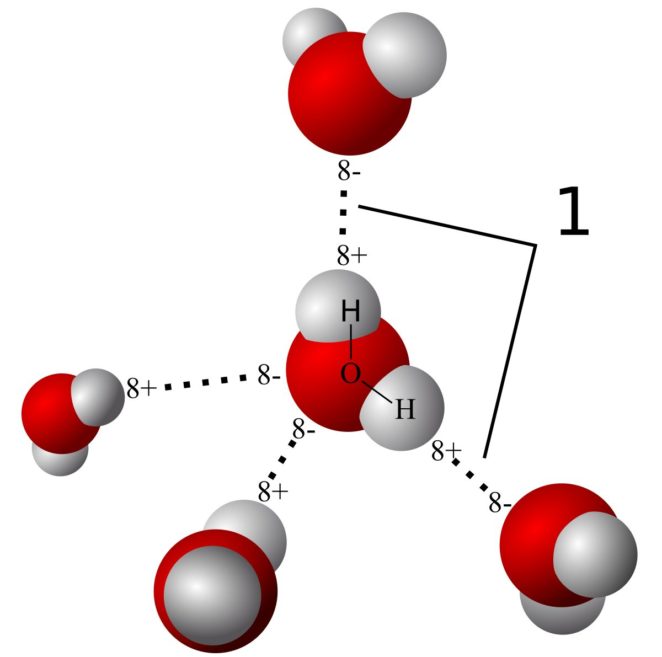 What are hydrogen bonds? A good place to start with a definition is by looking at water. The water molecule consists of two atoms of hydrogen and one of oxygen, chemical formula H2O. (See diagram). The water molecule has a dipole, meaning that it has a slight positive charge at one end, and a slight negative one at the other.  Attractive forces exist between water molecules; the positive charge of the hydrogen atoms of one molecule attracts the negative charge of the oxygen atoms of another molecule, and these attractive forces are called hydrogen bonds (although in fact, the word “bond” is a misnomer – they are in chemical terms a relatively weak intermolecular force). Hydrogen bonding is a special type of dipole-dipole attraction in which the hydrogen atom acts as a bridge between two electro-negative atoms.

These particular bonds influence the structure of all living things. The DNA molecule (the double-helix) is held together by hydrogen bonds. The same is true of the structure of all the protein molecules of the bodies of humans and all other mammals, from those in the largest organs, such as our muscles and our brains, to the smallest components of cells, such as enzymes. Hydrogen bonds are generally formed between molecules containing oxygen and nitrogen atoms, and occur when a hydrogen atom attached to one of the former atoms in a molecule is attracted to an oxygen or nitrogen atom in another molecule. The two molecules are then drawn close together by means of a so-called “hydrogen bond” (really an intermolecular force).

A good way to assess if hydrogen bonds truly are essential to life would be to consider the effect on the earth and its organisms if they did not exist. There is no life that can exist without water, even of the most primitive type (for example, even bacteria, one of the most simple life-forms on the planet, are constructed of proteins, which are maintained to a great extent by hydrogen bonds).