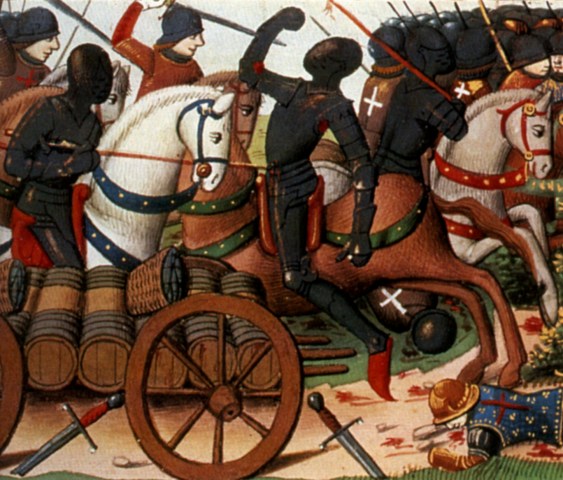 The Battle of the Herrings did not involve any herrings as combatants, and none of them was actually alive at the time, but their presence was a vital factor in an incident during the Hundred Years War that would come to have important and unexpected ramifications.

In February 1429 an English army was besieging the French city of Orleans. The season of Lent was approaching, during which time meat was off the menu for Christians, which naturally meant the entire English army. With starvation being preferable to eternal damnation, an alternative source of protein was needed, and the solution took the form of a convoy of carts loaded with barrels of salted herrings.

The herring carts were under the protection of Sir John Fastolf, whose name would later be the inspiration for William Shakespeare’s SirJohn Falstaff. Problems arose when the convoy, protected by Fastolf’s troops, reached Rouvray, north of Orleans, on 12th February. A combined French and Scottish army intercepted the English and opened a bombardment of cannon fire against which the English had no reply.

This assault should have been enough to put paid to the herrings, but the Scottish commander made the mistake of sending in his men on foot to finish the job. The English had no cannons but they did have archers, and as soon as the Scots came within range they were the recipients of volleys of arrows. The French commander then sent in his men to rescue the Scots, but they suffered the same fate. Sir John then attacked with his own men-at-arms and put the combined French/Scottish force to flight.

The herrings were thus able to continue their journey to Orleans and the besiegers of the city could carry on with the siege.

The net result of the battle was that the French had to have second thoughts about lifting the siege of Orleans. It so happened that on the very day of the Battle of the Herrings, when the force that should have been doing the job of relieving Orleans was being routed at Rouvray, a would-be commander was pleading for a chance to show how it should be done. With no other alternatives on offer, the high command agreed and thus the legend of Joan of Arc was born.