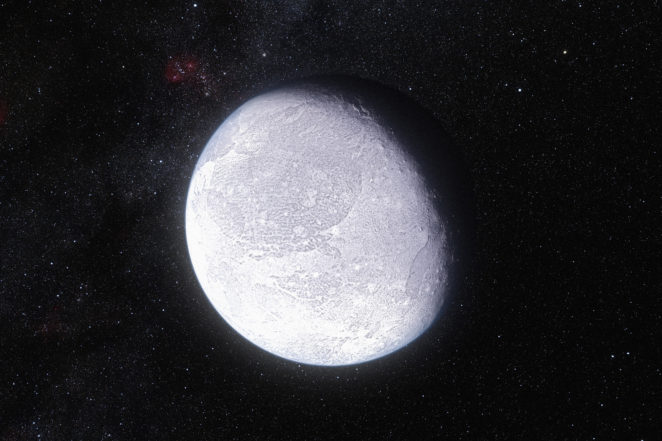 Eris is a dwarf planet that, when discovered in 2005, was found to be larger than Pluto, which had been regarded as the Solar System’s ninth planet since its discovery in 1930. This posed huge question marks over Pluto’s right to that status, which has subsequently been removed.

(Actual image of Eris and Dysnomia)

Eris has an elliptical orbit that takes it from 38 AUs from the Sun at its closest to 97 AUs at its furthest point (AU stands for Astronomical Unit, one of which is the average distance of the Earth from the Sun). For comparison, Neptune is just over 30 AUs from the Sun and Pluto’s orbit varies from 30 AUs to 49 AUs.

Pluto’s orbit is almost wholly within the Kuiper Belt that consists of a vast number of small objects and is the source of most of the comets that visit the inner Solar System. However, Eris is considered to be a member of the “Scattered Disc” that extends beyond the Kuiper Belt as a diffuse outer halo. The orbit of Eris is not only highly elliptical but at an angle of 44 degrees from the plane of the Solar System within which the “regular” planets orbit. A complete orbit of the Sun by Eris takes around 560 years to complete.

(Artist`s impression of Eris and Dysnomia)

Eris, which, at around 2390 kilometres, is believed to have a diameter about 200 kms larger than that of Pluto, is the second brightest object in the Solar System (the brightest is Enceladus, a moon of Saturn). This would appear to be because the surface is covered in frozen water and methane that are highly reflective of the Sun’s rays.

Eris has a moon of its own, named Dysnomia, which could be as large as 685 kms in diameter, which makes it a relatively large Scattered Disc / Kuiper Belt object in its own right. Calculations based on the orbit of Dysnomia around Eris enable a good estimate to be made of the mass of Eris, namely 27% greater than that of Pluto.

In Greek mythology Eris was the goddess of strife and discord, which seems appropriate given the upset caused to the status of Pluto from Eris’s discovery. Dysnomia was a daughter of Eris, her name meaning “lawlessness”.