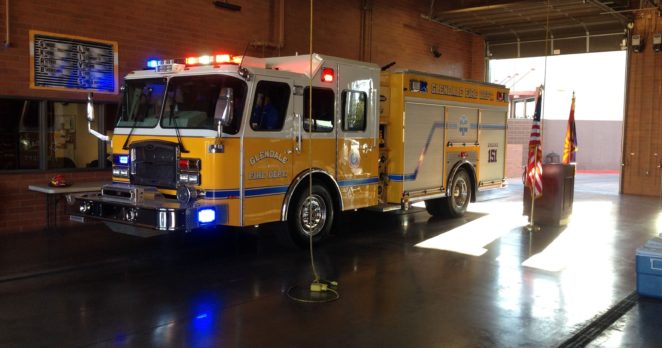 One thing that seems to be a common thread when a disaster happens like in this case a home in Glendale Arizona on Thursday afternoon was burned down to the ground but due to the quick thinking of 11 year old named Jacob King who was playing basketball with a friend when his friend alerted him of a fire that was burning the shed of his parents home.

Jacob then alerted his relatives who were inside the home that a fire that began inside a shed was spreading to the his home.

When his relatives alerted the Glendale Fire Department that their house was on fire, the Glendale Firefighters arrived at the King home to douse the flames while everyone in the King house were able to escape except for their dog “Chico” who due to the actions of the firefighters in Glendale used special equipment to revive the dog who almost died from smoke inhalation which is the major cause of death in fire disasters after Chico was taken out of the burning home.

Jacob is being modest when the firefighters call him a “hero”. Jacob simply said he could not live with himself if any of his family members had died in the fire if he did not alert them.

The cause of the fire is under investigation but the likely cause was chemicals inside the shed that may have started the inferno.

The King family are being assisted by the American Red Cross to find shelter since it is unlikely they will be able to return to their home that was burned down to the ground.

Remember this rule of life. You can replace a home, auto or any material object. A life lost cannot be replaced. I like the spirit of Jacob who did his job to save his relatives from death viz a house fire.