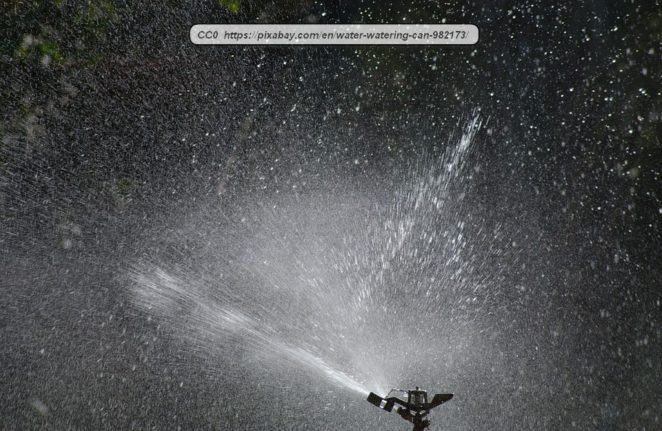 There is a surprisingly common error that lots of people make in regard to the care of their yards and gardens. The mistake often results in poor crops, persistently brown patches in the lawn, and even dead plants. It all revolves around proper and improper watering practices.

Watering the yard and garden is one of the most important parts of having a green lawn and a productive garden. If plants don’t get watered the right way, they tend to weaken, turn brown, and die.

What happens in frequent, shallow watering

The incorrect method most often used by people is to run the water once or even twice every day for a half hour or so. When this is done, the water doesn’t have a chance to soak down very deeply.

Particularly in the heat of the summer, moisture evaporates rapidly out of the surface layer of the soil. Any moisture that was in the lower levels of the soil is also pulled to the surface by capillary action and it, too, is evaporated.

The result is that the soil dries out to a deeper and deeper level.

As an example, let’s say that a person waters the lawn with a sprinkler for a half hour, twice a day. Since a great deal of the water put out by a sprinkler evaporates before it even touches the dirt, it is reasonable to assume that only about the top inch of soil gets dampened.

The plant roots are sensitive in regard to where the moisture is. This means that most of the roots will end up growing in that top inch of soil. Roots grow where the water is. The soil under that is dry, discouraging deeper root growth.

As it happens, the top inch of soil is the most impacted by the heat of the sun and the drying condition of the wind. Since this is where the roots are focused in shallow watering, the plants are strongly and adversely affected by the sun and the wind.

What happens in deep, infrequent watering

The shallow, 30-minute watering amounts to applying about a half inch of water, which soaks down about an inch. By the time the soil is watered again, most of the moisture has already evaporated, so there is no additive effect.

At a depth of four inches, drying wind has no affect at all and the heat of the sun doesn’t have much impact, either. Moist soil dissipates heat easily and quickly.

This can be seen by experiment. Pour a gallon of boiling water on damp (not wet) soil, then immediately dig down four inches and touch the soil. It will normally still be cool because the heat has already dispersed.

There is also a cumulative effect. It takes longer for moisture to be pulled up four inches through the soil in order to be evaporated. Unlike with shallow watering, where the soil has dried out by the time it is watered shallowly again, not all of the moisture evaporates when the soil is watered more deeply.

This is the cumulative or additive effect. The next time the soil is watered with two inches of water, two days later, the water has the chance to soak down even more deeply.

The impact on plants

As already stated, the roots grow where the moisture is. If the soil gets damp to a depth of four to eight inches, the plant roots grow to this depth, where they are no longer hurt by drying winds and the heat of the sun. Deep watering encourages a deep, strong, healthy, and vibrant root system.

Recently, I had the opportunity to see this in action. A person who was having difficulty growing tomatoes couldn’t understand why I had such a healthy crop. It took very little for me to discover the reason they had difficulty; they were watering for a half hour, twice a day.

I use the same amount of water, but only water twice a week and I water deeply. Tomatoes (and many other garden plants) have a very deep root structure. In good conditions, tomato roots can reach more than four feet deep.

I live in the same town, use the same amount of water, I am subjected to the same temperatures and amount of sunshine, yet my tomatoes are far healthier simply because they are watered deeply.

This is just as true of most garden crops and lawn grass. The reason our lawn is green is because of the deep watering. It actually isn’t because I’m putting more water on the yard and garden, but because the water is allowed to soak deeply.