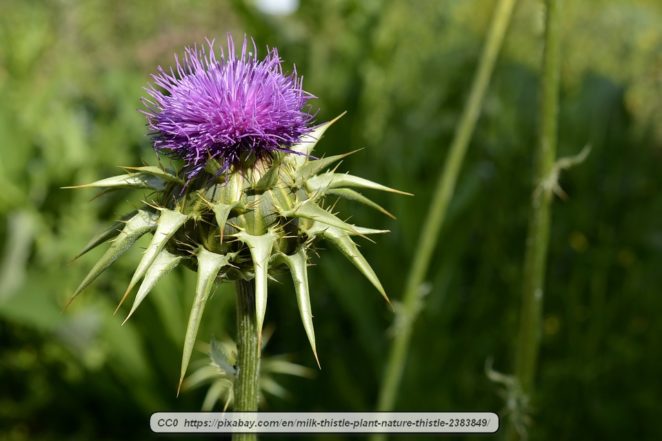 For many people through much of the world, milk thistle is an invasive scourge and hated weed. Part of the reason for this is that the plant has sharp spines on the leaves and flower head. When it is growing in a lawn, the yard is then not suitable for walking around barefoot. However, milk thistle is quite edible and healthy.

Sometimes called blessed milk thistle or holy thistle, this plant is native to the middle east, southern parts of Europe, and parts of Asia. It has become naturalized in most of the world, though.

As the name implies, this is a member of the thistle family, which also makes the plant a kind of aster. It is biennial, requiring two years to complete its lifecycle. The plant grows to over three feet in height and the leaves and flower heads have long, sharp thorns.

The flower is pink, purple, or reddish.

Being closely related to globe artichokes, which are also members of the thistle family, the unopened flower heads can be cooked and eaten like artichokes. Normally, the unopened flowers are collected, rinsed, and boiled in lightly salted water. Once they have softened, they can be peeled and eaten in the same way that artichoke hearts are eaten. The flavor is quite similar, too.

Milk thistles also have an edible root. This can be rinsed and eaten raw, or it can be sliced and fried or cooked into stews. The flavor is mild and slightly nutty.

The leaves of this plant are also quite edible, though the spines need to be removed before cooking and eating. The flavor is very slightly bitter, much like young spinach.

Even the stems can be eaten. For this, they need to be peeled, then soaked overnight in salted water. The stems are more bitter than the rest of the plant and the saltwater bath removes a great deal of the bitterness.

Milk thistle is high in a number of vitamins and minerals, particularly potassium. This plant has been used for hundreds or thousands of years as a treatment for liver problems, especially those caused by long term alcohol use.

This thistle has also been used to treat gall bladder issues and depression. It has been used successfully to treat mushroom poisoning, mostly involving poisoning by consumption of Amanita mushrooms.

The plant is astringent, diuretic, hepatic, stimulant and tonic.

Despite the fact that this is an invasive weed throughout most of its current range, milk thistle is not only edible, it is also medicinal. Like so many other problem weeds, this one is great to know about, particularly for survival situations.