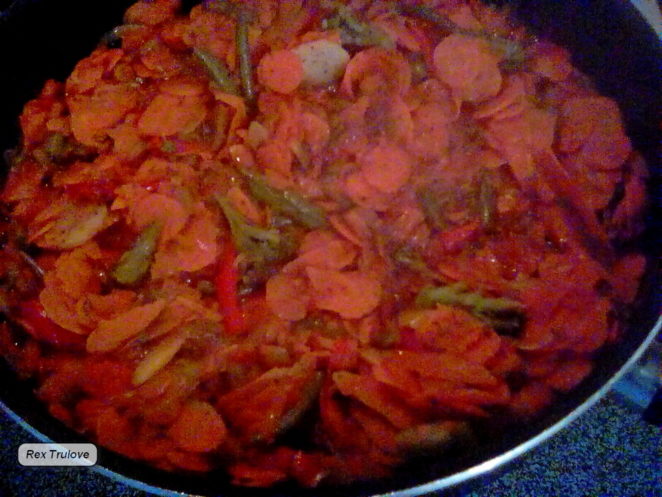 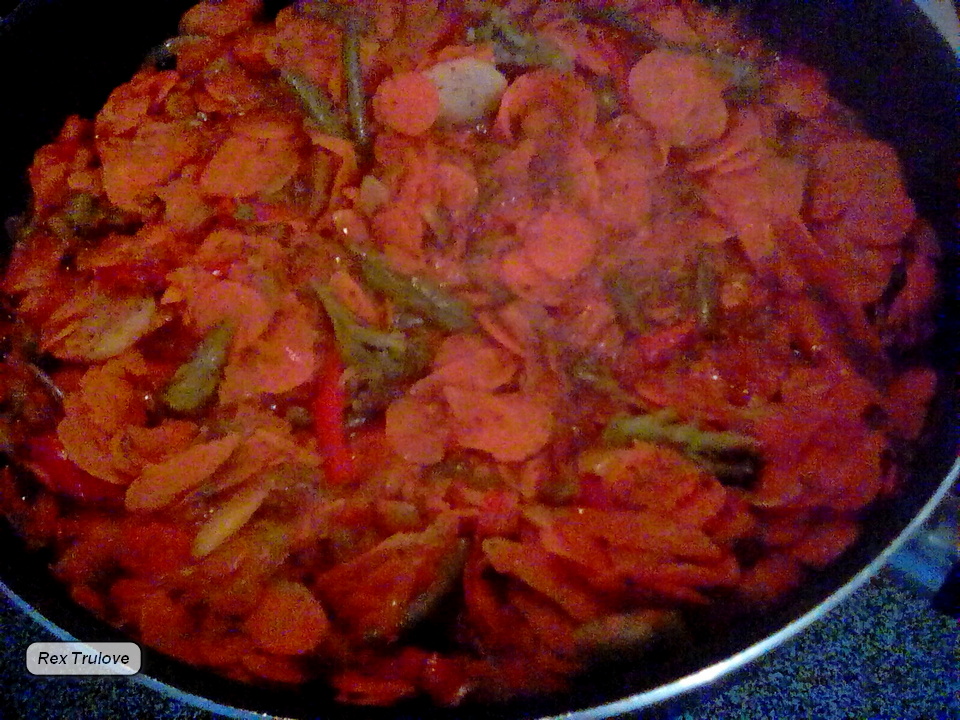 Sometimes, necessity really is the mother of invention. This recipe came about during a period of time when we had very little in the house to eat and two young, hungry children. Among the few things that we did have in abundance were carrots and a few other vegetables, but neither child was especially fond of carrots. We also had a large package of spaghetti.

I improvised and to say that the meal was a hit would be an understatement. The kids went crazy over the dish and it is one that they still love, nearly three decades later.

This recipe is also highly changeable, based on what you have on hand. It is a vegetarian meal since we had no meat in the house when this was first created, however meat can also be added. The amounts listed can be changed, too. However, it was purposely made with the amounts being similar, for ease in remembering the recipe.

This dish is quite delicious and very filling.

1. In a wok or large, deep fry pan, cook the vegetables (including the garlic) in the olive oil over medium-high heat, stirring often, until the carrots are beginning to get soft. This usually takes about 15 minutes to a half hour.

2. Reduce heat to low and add the soy sauce, Worcestershire sauce, vinegar and brown sugar. Stir well and let the mixture simmer for 1/2 hour, covered. If necessary, add a little water if the sauce starts to dry up.

3. Serve the stir-fry and stir-fry juices over a bed of the cooked, hot spaghetti noodles.

I usually add oregano or Italian spices to the vegetables right after adding the sauces. Don’t add salt, though, because the soy sauce adds plenty of salt.

We also like to sprinkle grated Parmesan cheese over the top of this. However, since not everyone likes the addition of the cheese, they can simply be given the container of Parmesan cheese and can be allowed to add it if they want it.

Other vegetables can also be added to this, so you can use what you have on hand. Sometimes we make it with broccoli, green beans, bean sprouts, or water chestnuts added. We’ve made this with boneless pork or chicken added and also with bacon, but to be honest, the meat doesn’t really add much to the flavor. We do sometimes add chicken bouillon to the dish, though, just enough for flavor.

Remember me saying that our kids, adults now, still love this dish? Our daughter, who lives with us, has a birthday today. By tradition, the birthday girl or boy gets to choose whatever they want to eat for birthday dinner. She requested carrot stir-fry, which is now cooking. I’d saved back enough money that she could have had anything except something tremendously expensive. She didn’t select steak, seafood, or other ‘special’ meals. She selected the carrot stir-fry with cheesecake for dessert. She’s on a diet, but this is the one day she gets to splurge.