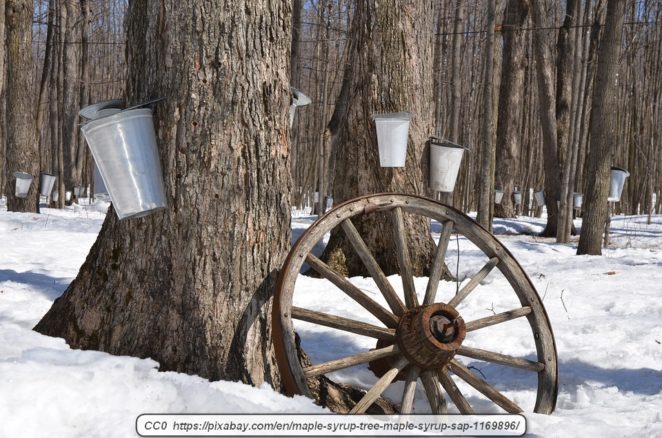 Maple syrup is loved and consumed in many places in the world. It is certainly loved in the United States, particularly on pancakes, waffles, biscuits or other breakfast foods. Though the syrup is usually made commercially for sale in stores, people can also make their own.

To make maple syrup, first, you need access to the trees. Most often, sugar maples, black maples, or red maples are used, but all species of maple can be used. Quantities of sap and sugar content are just less on many kinds of maple.

Note that a very similar syrup can be made from the sap of a number of other trees, too, particularly birch. However, properly speaking, this would not be maple syrup, even though the steps are the same.

You’ll also need the taps, called spiles, to get to the maple sap. Buckets are needed for collecting the sap. A large pot or kettle is needed for converting the sap into syrup.

Tree leaves produce, among other things, sugar. This is the energy source for the tree. In fact, this is common in other plants as well, and it is a product of photosynthesis. The sugar is carried by the sap to the growing parts of the tree.

Late in the year, when temperatures drop and the days get shorter, the trees begin to withdraw the sap into the roots. It is this that allows them to survive the winter. This process of withdrawing the sap is also responsible for the yellow, orange, red, and gold colors of autumn, and it is why the trees drop their leaves.

When temperatures begin to warm in the early spring, the tree sends the sugar-laden sap back up to the branches and developing leaf buds. This is the time of year that the greatest amount of sap flows, so it is the most productive time to tap the trees.

Using the spiles and collecting sap

The spile is a simple device that punctures the bark and inner bark (cambium). It is a tube that carries the sap from the cambium to a bucket that is normally hung from the spile.

The flow of sap into the bucket can be surprisingly rapid. The sap is watery and almost clear, but it contains a high sugar content.

The easy part is to make the syrup, though it is time-consuming. The sap can be consumed as is, but it should first be brought to a full boil for a minute or two to kill bacteria and molds.

Thus, the sap is transferred to the large pot or kettle, which is placed over a heat source. Maple sap is mostly water, so to make the syrup, the sap is brought to a boil before reducing heat and continuing to cook it. The goal is to boil off most of the water. This normally takes several hours.

The syrup is ‘done’ when the water has been reduced to approximately 1/40th of its original volume and is about 60% sugar. Put in another way, if you start with 40 gallons of sap, it is syrup when the volume is down to about a gallon.

This also explains why real maple syrup is expensive. It takes five gallons of sap to make a single pint of true maple syrup. Still, a single tree can be tapped multiple times and a surprising amount of sap comes from each spile.

Maple syrup has long been used as a sweetener. Native Americans were producing maple syrup long before the first settlers arrived. It was the main sweetener used in North America until sugar became more popular. Even today, Canada and the US produce nearly all of the maple syrup used in the world.

As a final tip, once a bottle of maple syrup has been opened, it should be refrigerated and should be used within a couple of months. At room temperature, it will spoil rapidly. It can be frozen for longer term storage, however.