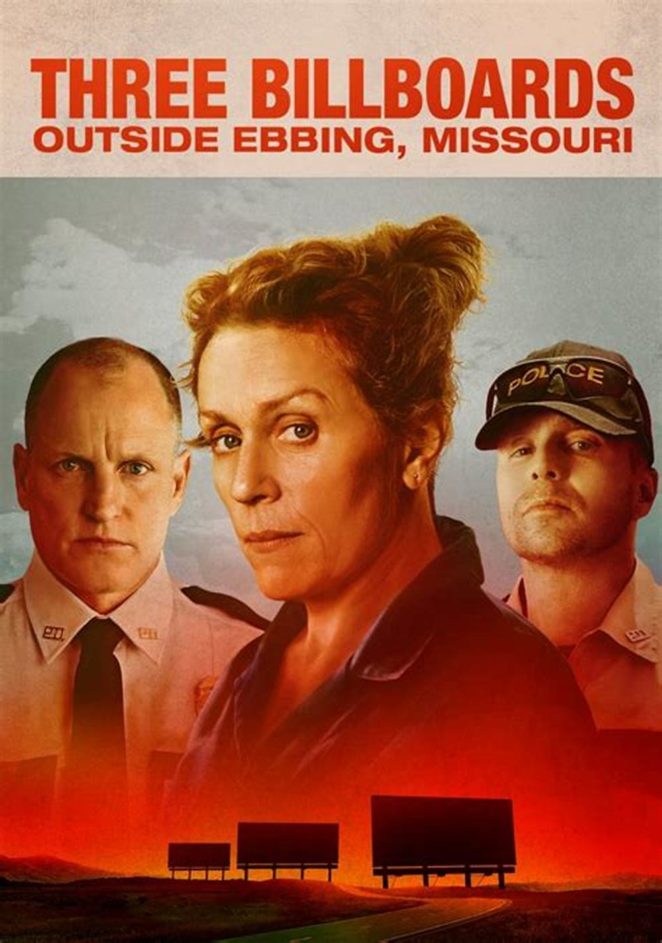 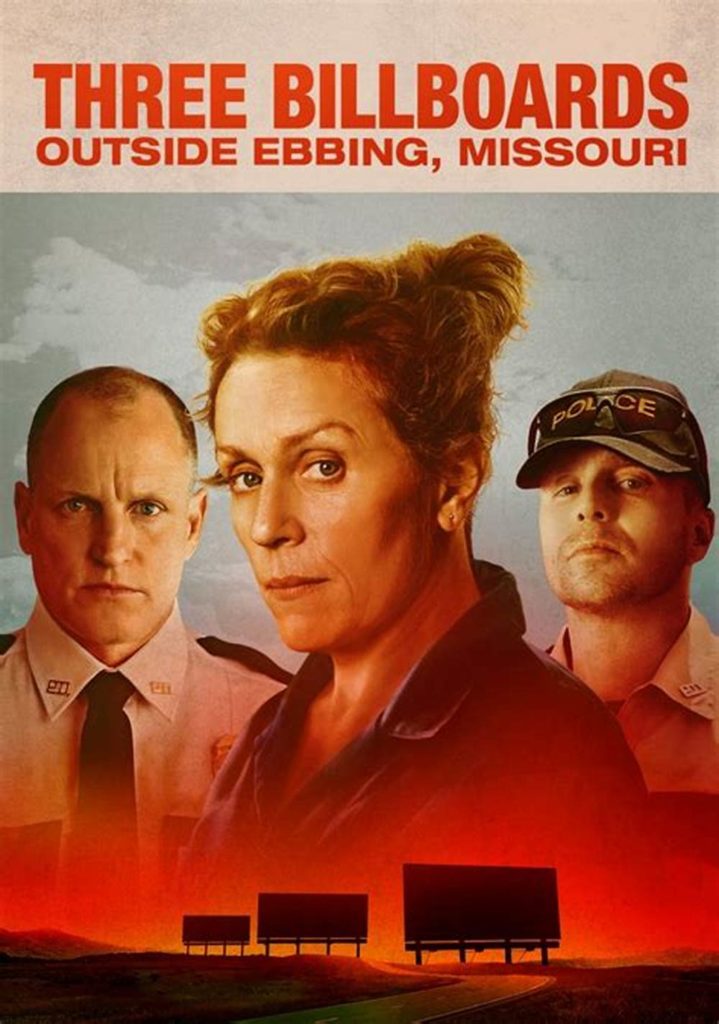 Due to the #metoo thing last year Hollywood had to react, and reflect, and so nominate films for Oscars with feisty and put upon female characters at the helm, a voice Hollywood has not always had on screen. Because of this rather faux political correctness in an industry that sells unrealities they had also done something similar the previous year with black actors after that particular protest. Frances McDormand’s angry lead southern gal misanthropic was the ideal conduit for that cause, winning all the main acting gongs, including the Best Female Oscar and the first female to win both that and the Screen Actors Guild Award for Outstanding Performance by a Female Actor.  Sam Rockwell picked up the other Oscar from this film from its seven nominations for his performance as the male all the women are complaining about. It’s almost as if this film was written with #metoo in mind to target the Oscars soft PC underbelly.

Writer and Director Martin McDonough (The Guard, In Brugges) was inspired to pen the movie after seeing billboards about an unsolved crime while travelling “somewhere down in Georgia”. He had Mcdormand in mind when writing this and researched the billboard tales across America around crime and loss, basing the heart of his story from actual events in Vidor, Texas where the cops ignored facts and the parents of a poor girl murdered in 1991 by an alleged hometown hero from an old money family went unsolved. As the police have done nothing yet the billboards are still up on Interstate 10. This film was not shot in Ebbing, Missouri but Sylva, North Carolina.

In the town of Ebbing, Missouri, angry Mildred Hayes (McDormand) is grieving the rape and murder of her teenage daughter, Angela (Kathryn Newton), seven months earlier. They did not have a great relationship and the last time they saw each other it was an argument, Mildred living with a violent ex husband (John Hawkes) doubling the pain, now shacked up with a pretty 24-year- old college grad, his way of dealing with the loss of his daughter.

Mildred is steaming over the lack of progress in the investigation so she decides to rent three shabby and abandoned billboards near her home, space long since abandoned now the freeway takes traffic pass the town.

Red Welby (Caleb Landry Jones) rents the billboards out and agrees an affordable fee for the whole 12 months to post some rather antagonistic messages to the local sheriff Woody William ‘Bill’ Willoughby (Woody Harrelson) to pull his finger out of his butt, the text reading: “RAPED WHILE DYING”, “STILL NO ARRESTS?”, and “HOW COME, CHIEF WILLOUGHBY?”

The billboards upset many townspeople, especially as the chief has cancer – doofus, racist, violent, and alcoholic Officer Deputy Jason Dixon (Sam Rockwell) the most intransigent towards her.

Mildred and her college age son Robbie (Lucas Hedges) are harassed and threatened, including a gruesome run in with her dentist. But Mildred is a tough old bird and stays firm about keeping the billboards up, local dwarf (Peter Dinklage) taking a shine to her and her pluck.

Willoughby is sympathetic to Mildred’s frustration but still finds the billboards an unfair attack on his character as he tried real hard to get the bad guy. It could have just been some scumbag passing through on the highway so DNA tests pointless. But Mildred is going to make him look harder if it kills him as the grief keeps coming.

As with all big Oscar winners and Best Picture movies of late they are rarely the best films of the year, sometimes rather dull or uninspiring. I could name a long list. Slumdog Millionaire (2008) was the last winner I enjoyed and The Big Short the best nominated non winner for twenty years for me. Also, as with all meandering Oscar winning dramas, it was the winning that made it do good money, not so much the movie, TBOEM $14 million budget pulling in a tidy $167m.

This film is solid but not something that had me gripped. In fact it’s quite an ugly film in places and never really puts across clear message on what it’s all about other than grief and the Deep South. I have no idea why there is a drawf in it and unsure why the deputy is cast as such an odious creep and how the hell would a guy like that get that job in the police force anyway? As I say it almost feels like McDonough has written a movie to reflect the #metoo thing sweeping the west right now with that strong female lead, dare I say blatant Oscar chasing, knowing this lead character would win if she nails the performance. I think because the film was so ugly around race and gender issues it did not get to win Best Picture, ironically, The Shape of Water a clear winner on the night.

It’s all about McDormand’s turn and strong it is but this nowhere near the complete and emotive movie you expect. There are no real twists, quite a few bum steers and few conclusions drawn, and a grubby ending. You could say it was a tale of redemption but I would say one of those films pushed on the public by the critics because we are not sophisticated enough to know better and so not a good pick for a general audience that wants to be entertained. Its solid but incomplete.