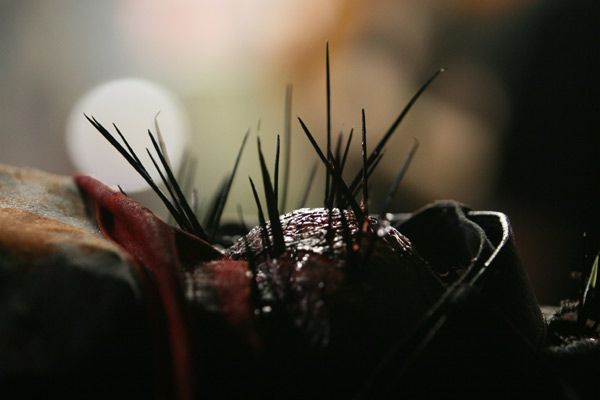 So ‘Splinter’, a decent little low budget American horror from director Toby Wilkins, Grudge 3 (the American remake) his only notable work of not much output so far. I think it’s fair to say this 2008 effort is his best film yet.

With a $700,000 budget and a $500,000 return it didn’t register in many places but for me one of those directors who can do quite a lot with very little and so something better from this guy sure to come along one day. Much cheaper and malleable Digital film and film crews allow for these more creative guys to work and get their stuff out there. He did that and I enjoyed it.

It’s The Thing meets the Walking Dead with a bit of Deliverance thrown in and with a solid acting line up delivers the premise well, Shea Whigham from Boardwalk Empire (Nucky’s brother) good in the lead. You want the American horror not to be cliché and the cast no always hacked down in order of youth, cool and state of undress and this is not that.

Geeky biology graduate Seth (Paulo Costanzo) and his hot girlfriend Jill (Polly Wagner) are heading out to the Kansas sticks for a romantic camping holiday. But they are about to have a very bad day when they encounter on the run criminal Dennis Farrell (Shea Whigham) and his junkie girlfriend Lacey (Rachel Kerbs), who carjack them on the quiet country roads.

Lacey Belisle: ‘Speed up, or I will blow a hole in you big enough to watch TV through’.

When the SUV hits something in the road as dusk approaches Farrell waves his gun at Jill to pull the four over to a gas station to get some fuel and a new tyre. Animal lover Lacey is still freaked out by the road kill twitching its last breath back there high on pills and stress levels are on edge. But things are about to get a whole lot worse, and some, when they discover the garage clerk is dead in the toilets and his body mutilated and covered in black spike things, the zombielike body soon convulsing and jerking uncontrollably and heading for the garage, where Farrell shoots it with his gun but not before it takes a big chunk out of Lacey.

Cowering in the garage Farell finds it hard to accept his girl has been infected by whatever this thing is and insists they pull her limp but mangled breathing body into the garage shop to try and save her. Bad idea. Farrell has already ripped the phone lines out and no one is coming along any day soon to save them when Lacey goes for them. But how to get out of the garage and back to the car? Could this be Seth’s chance to prove he is not a geek and get his girl out of this nightmare or will Farrell turn antihero and save the day!

There have been worse horror flicks, but although this one offers a few scares, it doesn’t have a lot of imagination. But it’s still good fun as well acted and believable although nothing really groundbreaking or special. The clichés are not blatant and plenty of role reversal going on as the geek tries to man up and the hot chick with brains reverts to token ‘totty’ in tight denim shorts.

It was nice to see Shea Wigham in a movie as I have only known him from four series of Boardwalk Empire (known as Chief Wigham there) and convinces as the redneck villain although not exactly a stretch for an actor. Not heard of the rest of the cast but pretty good work for the genre.

The horror premise here is not that new but original enough to engage, if you are prepared to accept one or two zombie staples on the narrative menace problems of slow moving zombie things and escaping from them. These things are particularly cumbersome. But that’s the horror genre for you and although you won’t be scared by this it’s well put together, taught, gory and tight and always open to a twist or two. I’m sure ciao horror legend Hogsflesh would have done a better review on this but for me, any horror that steers away from those slasher/zombie American horror hackneyed clichés gets my vote.

Zombies so lots of gory special effects to talk about.

-Construction: The creation of the gas station

-Weather: Lots of it-

It’s Kansas in the summer so storms galore effect the filming. As if we care.

It’s much cheaper to do it this way but with higher resolution the low budget films look sharper and better.

-Make up: Creating a spikes-

More behind the scenes boredom.

Film4 –‘Deliver[s] plenty of bang from the filmmaker’s limited bucks – but Splinter’s greatest strengths, rare for the genre, are its solid characterization, witty dialogue and charismatic performances’.

Wall Street Journal –‘It’s short, taut, nicely shot, well-acted, astutely directed, specific where it might have been generic, original enough to be engrossing and derivative enough to be amusing’.

The Milwaukee Times-‘The film lacks that spark of originality or humor or thematic resonance that might have elevated it from forgettable genre time-passer to something more lasting’.

New York Times –‘With Splinter, the director Toby Wilkins honors the conventions of the horror genre with skill and enough wit to keep the scares sharp’.

The Mail –‘If you can get beyond one basic narrative flaw, and a low budget dynamic which provides limited looks at our Bottin-inspired fiends, Splinter will come as a wonderful little fright flick surprise’.